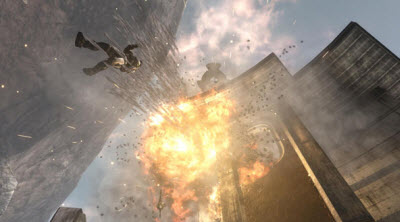 The official game won’t launch until this fall. But for a few short weeks, Halo fans will have their chance to play the multiplayer version of Halo: Reach for a few short weeks. This game is a prequel to the Halo series and doesn’t include Master Chief, the main character of the previous games. But it does include other Spartan warriors that you can play ad nauseum, and, given the fact that the face-shielded helmets are the same, you won’t really notice the difference.

I’ve played it for a few evenings, and it’s clear to me that this one is going to be a blockbuster. The game is Kirkland, Wash.-based Bungie’s swan song game in the Halo universe before the developer moves on to the new game universe it is building in partnership with Activision Blizzard. And it’s clear that the developer is treating this game with care. Considering there will be many more Xbox 360s sold by this fall, I’ll go out on a limb and predict this is going to be one of the bestselling Xbox 360 games of all time. 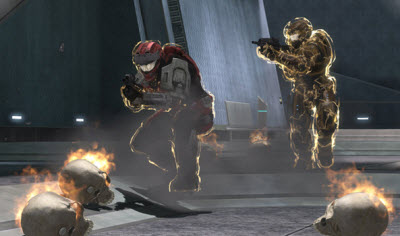 Of course, I have no idea how good the single-player campaign will be. The single-player campaign takes place at a sad time for humanity, when humans first encounter the Covenant alien race and face extermination. They respond with the Spartan super-soldier program that trained an elite fighting force on the planet Reach. The events of the game happen at about the same time as the events in the first Halo novel, Halo: The Fall of Reach.

Of course, chances are quite good that most players are going to spend a lot more time on the multiplayer game than the single-player game. And this version of Halo multiplayer is as good as they get. As of this writing, there are 384,823 players online and 303,256 matches played. That’s in just a few short hours. I tried to get in again this afternoon but it seems to be overcrowded. So while you’re waiting around, you might want to read my impressions of playing the beta test so far.

To play the beta, you have to sign into Xbox Live with your Gold membership account ($50 a year) and then put your Halo 3: ODST disk into the machine. You can then select “play the beta” and the multiplayer beta will download to your hard disk. After that, you can play from the Halo 3: ODST menu. If you have a beta code, you can download it directly using the “redeem code” page of the Xbox Live sign-in menu. It takes about 1.2 gigabytes of hard disk space. Bungie is warning that you may have a long delay in getting the full beta downloaded. 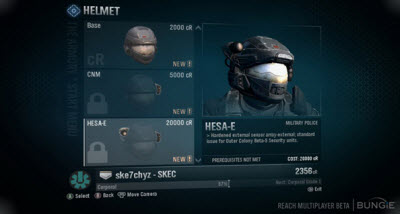 In the armory, you can choose different helmets and spend points that you earn in the game on different kinds of decorations or gear. Yes, it’s true. Virtual currency and virtual goods are firmly implanted in the Halo universe in addition to being part of Microsoft’s Xbox Live online game service. And, as with Halo 3, you can capture films of your games and snap pictures and post them as brag clips for all the world to see.

Most aspects of combat are the same, from the game controls to the enemies and weapons. One of the big differences in this multiplayer combat is that you pick your load-out, or weapon kit, as soon as you spawn. You can choose special abilities, such as the “jet pack,” which is a great addition for maps where you need upward mobility. You can fly upward one or two levels before your jet pack boost runs out, so you can’t use the jet pack all of the time. But that’s enough to surprise your rivals and to put everyone on alert that they’re playing in a three-dimensional combat game. Another ability is camouflage, which lets you wander around and sneak up on folks who aren’t paying close enough attention to the slightly visible enemy wearing it.

You can play a few different maps. Boneyard is a map with a decommissioned USNC space frigate sitting in the middle of it. It has high parts that can offer commanding views for long shots, and lots of areas for cover. The game play moves across three sections of the map as battle progresses. 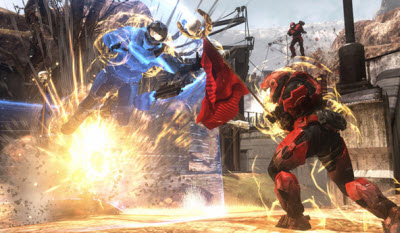 Overlook is a map with high ground and low ground where you can fight with other players for control of energy generators, which one side is trying to defend and the other side is trying to sabotage. Powerhouse is on an old installation on a mountain outcrop. I’ve played a bunch of capture-the-flag style matches on this one where you try to retrieve a bunch of flags and defend them. There’s a big pool of water in the middle where you can slug it out for control hand-to-hand style or rain fire down on it from above.

I’ve spent the most time so far on Sword Base, which is set in the interior of a huge multi-story building with a big atrium. There’s a small pool of water in the middle with a Covenant gravity lift that shoots you up like a cannon when you step on it. You can climb up stairs and cross over bridges as you pursue enemies. There are a few places where snipers can thrive, but this is one of those short-range maps where grenades and melee combat rule.

From the moment I stepped into the battlefield, I got toasted. In the first few games I played, I got two or three kills and died a bunch of times, making for a net negative kill-death ratio score. 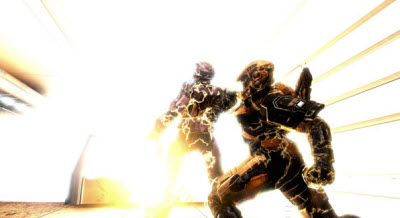 There are many ways to die in Halo: Reach multiplayer. One of the least dignified is via assassination. When someone sneaks up on you from behind and deals a melee blow, you don’t just die. An animation shows the enemy jumping on your back and killing you. It’s most satisfying if you’re the assassin, and quite embarrassing if you’re the target. I’m hoping there will be some kind of reward for whoever’s been assassinated the most.

The action is still fast and furious. You can’t dual-wield two weapons at once anymore. That’s a nod in the direction of making it easier for new players. But the fighting is so split-second that you really have to be dedicated to get good at it. I don’t consider myself particularly skilled in multiplayer combat. But it took about five or so matches to get to the point where I could get more kills than deaths. Neophyte players might get turned off by the fact that everyone else in the multiplayer arena is so good. That’s not so bad for Bungie, considering there are more than 30 million copies of the various Halo games sold. And this beta is really aimed at existing Halo fans.

I think it took me five or six matches to earn enough points get my first promotion, which is longer than the time it takes to get a promotion on an excessive achievement game like Modern Warfare 2. There are a bunch of stats that the game collects after each match. You can see which weapon you used most successfully. And you can see how long, on average, you survived in the game before getting killed. In games where I played lousy, I lived for 35 seconds. In games where I played well, I lived for 45 seconds on average.

It may sound like this is just the same as the old Halo game with different maps. But that would be a mistake. The new details add a lot to the experience. There are quite a few different game modes and playlist types that mix up the action. You can go after goals like flags or skulls. Or you can rack up kills or defend areas. You can also bet that Bungie is saving a number of surprises for later revelations as the launch date approaches. 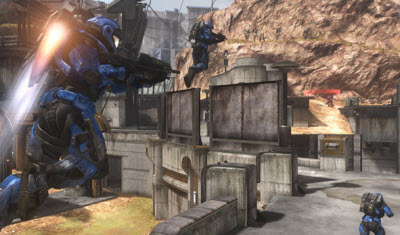 Bungie is adding a new mode to the multiplayer beta on May 14. That Spartan vs. Elite battle involves six-on-six duels between the baddest characters in the Halo universe and introduces “generator defense,” where you have to defend your energy generators from attack.  Xbox Live Silver account members (who don’t pay the $50) get a chance to play the Reach beta from 9 am PDT May 14 until 9 am PDT May 17.

If I could give a score to a beta game, I would give this one a 9 out of 10. There is plenty of innovation in the various maps, game modes, weapons, abilities and play types. But for now, I’m not going to give it a numerical review score. I’m just going to say it’s going to be a lot of fun to play and that you should get into the beta if you’re a Halo fan.