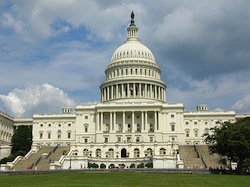 The Federal Communications Commission was rebuffed last month in its efforts to regulate Internet providers, but it hasn’t given up. The agency is reportedly preparing new rules that it hopes can promote net neutrality, the principle that providers must treat all Internet traffic equally, without hitting the previous legal hurdles.

A federal appeals court ruled in April that the FCC had overstepped its bounds when it ordered Internet provider Comcast to stop slowing traffic for peer-to-peer file-sharers. Now, the Wall Street Journal says FCC Chairman Julius Genachowski’s staff has begun briefing commissioners about a new plan to regulate Internet lines. And the FCC has also released the following statement, according to GigaOm:

The Chairman will seek to restore the status quo as it existed prior to the court decision in order to fulfill the previously stated agenda of extending broadband to all Americans, protecting consumers, ensuring fair competition, and preserving a free and open Internet. The Chairman will outline a ‘third way’ approach between a weak Title I and a needlessly burdensome Title II approach.

The “Title II” referenced above is the section of the Communications Act that regulates telephone lines. The FCC plans to impose some, but not all, of the restrictions placed on phone lines, the Journal says. It sounds like the FCC wants the power to make sure providers are delivering equal service to their customers, but it won’t impose other regulations like rate controls.

We’ve asked the FCC for comment but haven’t heard back.