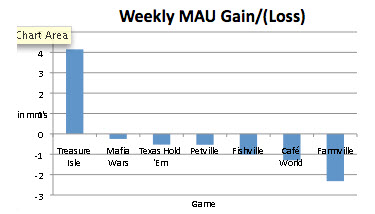 Zynga, the hot social gaming company that may be worth $4.5 billion, has had some big swings in traffic for its games. And it’s enough to make the Zynga folks feel like they’re on a roller coaster.

Thankfully, Treasure Isle, launched just last month, has been rising like a rocket. Last week, it added 4.2 million monthly active users, and today it stands at 26.8 million. Treasure Isle, a game where you dig up hidden objects on islands, is now the seventh most popular Facebook game and has passed up other Zynga hits Mafia Wars, PetVille and FishVille.

Such big swings in the number of users shows that Facebook gamers are fickle. And perhaps many of Zynga’s long-term users are now moving on to its new games. Still the swings on a weekly basis should not be over-interpreted. All of Facebook’s top 10 games lost traffic last week, except for Treasure Isle.

SecondShares, which evaluates the value of hot private companies and placed Zynga’s value at about $5 billion, also pointed out that Zynga is very dependent on Facebook, and the latter continues to make big changes to its platform that could affect traffic. Clearly, the social game business isn’t good for people who don’t like roller coasters.