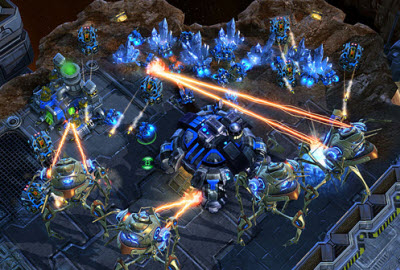 Mike Morhaime, the president of Activision Blizzard’s Blizzard Entertainment division, said the coming release of Starcraft II: Wings of Liberty was the company’s “most ambitious” in history.

Add to that the release of World of Warcraft Cataclysm, and the two games are going to give Blizzard a license to print money.  “We are poised to have our biggest year ever,” Morhaime said.

Starcraft II launches on July 27 in 11 languages across five continents, while Cataclysm, which is an add-on pack for the World of Warcraft online game, is coming later in the year. The company made the comments on its quarterly financial call today.

Blizzard will sell Starcraft II in stores in North America and Europe. But in other markets, it’s aiming to make the game more affordable by adding an option where players can pay for it based on time-based usage. Right now, in markets like China, you can buy prepaid game time for Blizzard games such as World of Warcraft. Morhaime said he expects to have big success in Asia with Starcraft II. In Russia, Blizzard plans to sell Starcraft II for $33 for a one-year play period. A four-month option will also be available.

World of Warcraft now has 11.5 million subscribers, up slightly. Better revenues from that game helped boost revenues in the quarter, Activision Blizzard said.

Starcraft II’s beta has been under way for some time and players are uploading videos of it to YouTube and are creating custom maps using the game’s built-in map editor. The game’s online play will take place on a redesigned Battle.net, an online gaming service that lets players play against each other over the web. You can sign into the company’s RealID identification service and then stay in contact with friends. And you can also use Facebook to invite your real-world friends into Battle.net.

In China, Morhaime said he is hopeful that an older expansion pack, Wrath of the Lich King for World of Warcraft, will receive approval in China and that will lead to further growth. China’s censors have to approve such game launches and have been slow to approve them. Last year, a dispute among government agencies led to World of Warcraft being knocked off the market for months. The game is now back up in China.

With Cataclysm, Morhaime said he hopes older World of Warcraft players, who have stopped playing the game, will return. One new feature is the ability to sell or buy things in World of Warcraft remotely. Not only can you do things like buy pets in the game from your PC, you will be able to do it via devices like the iPhone as well.