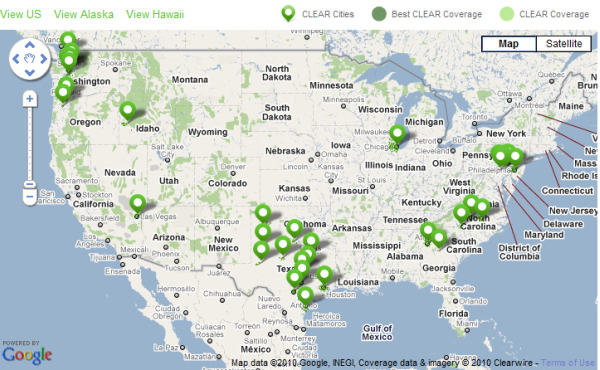 4G is the next big leap for the mobile industry, and that’s good news for mobile provider Clearwire. Yesterday the company announced new markets for its 4G network, which will bring the next-generation cellular technology to many smaller cities this summer and to larger cities by the end of the year. The news is also good for Sprint, which will see its 4G availability spread as well as a result of its partnership with Clearwire.

Clearwire has added 18 additional cities to its expansion plans for this summer. It previously said it would be rolling out 4G to Kansas City, St. Louis, and Salt Lake City. Now, according to CNET, it has added the following cities:

Major cities that Clearwire previously announced coverage for will have to wait until the end of the year for 4G — including New Y0rk, Boston, Los Angeles, Washington, D.C, and the San Francisco Bay Area.

Clearwire merged with Sprint’s WiMax 4G operation in 2008, and Sprint is now an investor in the company along with Comcast. Both Sprint and Clearwire sell services on the network, as does Comcast in select markets. Clearwire expects to make its network available to 120 million people in the U.S. by the end of 2010 — an increase from the 41 million people it currently covers.

The expansion comes just in time for Sprint’s HTC Evo 4G smartphone, due for release this summer.

Clearwire also announced a change in its agreement with Intel — a leading promoter in WiMax technology — which locked the provider into using WiMax until November 28, 2011. The change will let either Intel or Clearwire leave the agreement with only 30 days notice. This opens up the possibility for Clearwire to utilize LTE, a competing 4G technology that AT&T and Verizon plan to adopt.

Finally, Clearwire said that both Samsung and HTC will be bringing out 4G phones later this year with its Clear brand. The Samsung will be an Android phone “optimized for heavy video and video communications use”, and the HTC is described simply as a “a 3G/4G/WiFi enabled phone.” The HTC phone could be a Windows Phone 7 device, Engadget speculates.