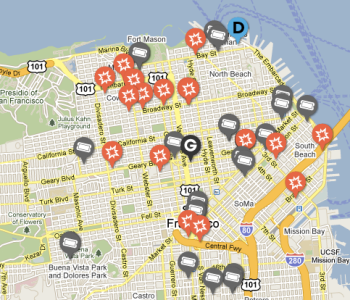 Targeting fans of Groupon and other coupon and bargain web sites, The Dealmap is today launching its web-based service to pull all the deals you might be interested in and all the related reviews and information you need into a central plotted map.

Like so many other applications today, Dealmap wants to organize and make this data accessible from almost anywhere, including your email, your browser, and soon your mobile phone, the company says.

It also makes unique use of location, placing emphasis on the deals and coupons in your local area or in locations you frequent. Integrating some functionality from local-business recommendation service Yelp, it gives users the reviews and information they need to make informed choices about which deals are best for them according to their preferences. The idea is to tailor the popular discount and deal trend to individuals.

When you enter your zipcode into the Dealmap site, it instantly populates your neighborhood with all of the bargains and deals available in the local area. You can then winnow them down by volunteering which ones you are most interested in, whether they be at restaurants, retail stores, or elsewhere.

Again, like Yelp, Dealmap lets you filter your search results by metrics such as how kid-friendly a venue is, or how expensive the products are. For those interested in catching all available deals, the service is also tweeting them as they pop up for 20 different cities.

Dealmap isn’t relying exclusively on retail and commercial partners to collect the deals displayed on the site. It’s using social media mechanics to crowd-source deals from its users. It’s even employing game techniques like status levels, badges and rewards to motivate users to contribute deals in their local areas. There are also leaderboards reflecting point totals for top submitters. Points can eventually be redeemed for gift certificates.

Dealmap shares revenue with the deal providers. The company also offers an API that lets third-party developers build on top of the current offerings. This will increase potential for local partners to offer a range of different options.

Based in San Francisco, the company has brought in $8.6 million from Norwest Venture Partners, Keynote Ventures and a handful of private backers.