It’s been some time since we received any new details on Chrome OS, Google’s web-focused operating system for netbooks. But that’s about to change in a couple weeks. We’ve learned from multiple sources that the Taiwanese computer manufacturer Acer will launch Chrome OS devices at the Computex Taipei show, which will be held from June 1 to June 5.

We don’t yet know what devices Acer will be launching. Chrome OS is designed for netbooks, but Google has also mentioned the possibility of bringing it to other device types like smartbooks and tablets running ARM processors. Smartbooks look like netbooks but run processors like those from ARM which are designed for mobile devices. Recently, there’s been talk of Samsung developing ARM-based smartbooks running Chrome OS, as well as support for nVidia Tegra 2 devices.

It’s still unclear how Chrome OS-equipped netbooks will coexist with those running Google’s Android mobile operating system. We’ve known since early 2009 that Android netbooks would begin popping up this year, and even Acer announced its intention to sell them.

My prediction? Google will probably settle on Android for tablets eventually — it’s already built for multitouch support, and its analogous to Apple bringing the iPhone OS to the iPad. Android’s small footprint also makes it easy to use in integrated devices, like Google’s upcoming “Dragonpoint”  TV project with Sony and Intel. Chrome OS, which is clearly better suited for devices with keyboards and trackpads, will find itself on more netbooks and smartbooks. Last year, Google CEO Eric Schmidt mentioned that the two projects will merge over time (see Google’s graphic below), so eventually the differences might not matter.

Google initially planned to release Chrome OS sometime in the second half of this year. Acer’s Chrome OS device launch in early June fits into that schedule, although we’re not sure when those devices will be available for purchase. 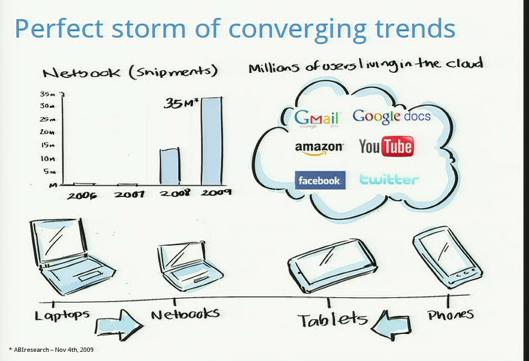