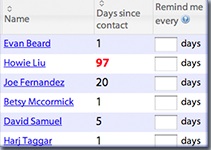 Etacts, a startup that uses social data to help you manage your email contacts, has raised $700,000 in a seed round of funding.

Palo Alto, Calif.-based Etacts works as a plugin for Google’s email application, Gmail. It scans your email data (just the recipients and titles, not the body) and determines who your most important contacts are. With that data, it can remind users to keep in touch with people, to respond to important emails, and can also display all your recent email and phone conversations with someone.

In its broad strokes, it’s similar to social email startup Xobni, but the Gmail focus (rather than Microsoft Outlook) and some features like the reminders are unique.

Etacts was incubated by Y Combinator.