There’s been a lot of chatter over the past few weeks about the long-term viability of social game developers. Facebook essentially shut down the viral channels social games were using to fuel their growth and is now attempting to force game developers to use Facebook’s own virtual currency, the very expensive Facebook Credits. While social game developers like Zynga are contemplating moving games to their own destination sites and launching full fledged mobile versions, they in fact have a much bigger challenge that needs to be addressed: their games have got to get a lot better.

Social Games are Now a Hits-Based Business
While there’s a tendency to think of social gaming as an extension to the casual gaming market, they are, in fact, a major growth market that is quickly becoming a high stakes, hit-based business. Social gaming is now generating over $1 billion a year in revenue and attracting major gaming players such as Electronic Arts. Now that free social viral channels are no longer available to promote a game, it costs quite a bit of money to launch a successful social game.

Zynga’s launch of its new title Treasure Isle was relatively successful, but this launch did not leverage viral channels and must have been enormously expensive to promote. Without viral channels, the only avenues for promotion are Facebook Social Ads (where Zynga is reportedly already spending a third of its revenue), and cross-game promotion, where a click in Farmville to promote Treasure Isle has the opportunity cost of a missed click for an offer or virtual good purchase. Even after this significant investment, Treasure Isle did not become a huge hit like Farmville. It ended up with the same metrics (daily active users, monthly active users, and % daily active users/monthly active users) as other Zynga titles such as Café World.

Now that the cost of promoting a social game has become extremely high, development will transition from the scattershot, let’s-see-what-goes viral approach in the early days of the market. New game titles are shifting to a much more calibrated approach with fewer titles that have a higher level of investment in order to hedge the promotion costs. EA Playfish has publicly stated that its revenue target for individual social games is as high as $1 billion, just like successful console game franchises. There is going to be a lot of upfront thought, development, and promotion for individual titles with that level of revenue target.

Social Games are Going to be Much Higher Quality
Even within Zynga’s short lifetime, its level of investment and the quality of its games has increased significantly. Mafia Wars is made of text and images. Farmville is a scrolling 2D graphics game that requires an order of magnitude more effort to develop. So what’s next? Emerging gaming platforms go through the three phases of game infrastructure: text, 2D graphics, and 3D graphics. A small team can create a text game and even a 2D game. By the time games get to 3D graphics, though, they’re extremely expensive to create.

In the past year there have been two huge developments for web browser based gaming: Flash 10 support for 3D gaming, and HTML5 support for 3D gaming via WebGL engines such as GLGE and Copperlicht. Very soon, web browser based casual gaming is going to go 3D. And although the Farmville audience is not interested in first person shooters, who doesn’t want their farm to look photorealistic, watch things grow and move as if they were cartoons, and see how different elements in the game interact with each other with a high level of realism? Similar casual games for the iPhone 3G, with its OpenGL graphics, look far better than the current stock of games in Facebook. Flash 10 and WebGL have now made it so that browser-based games will look as good as iPhone games and casual games like MapleStory that have a lot of the same game mechanics as social games and currently require web browser plugins. In addition, Facebook is improving its platform by streamlining its APIs away from its proprietary FBML, so very soon Facebook social games will look like the 3D casual games that currently require a browser plugin, such as this screenshot of MapleStory. 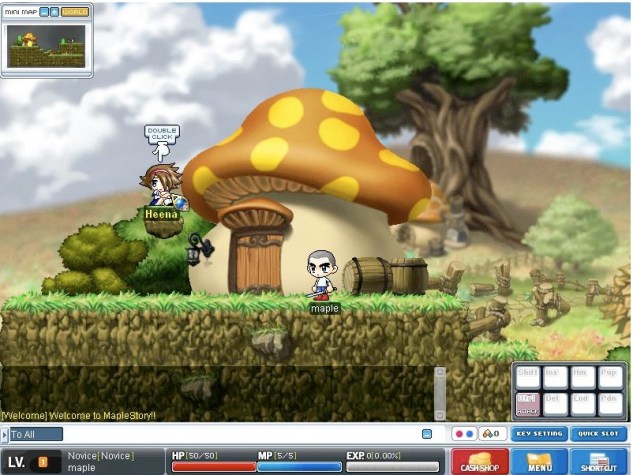 3D gaming is inherently a hits-based model. The cost of a great 3D console game is increasingly expensive, estimated as high as $60 million, with the average at $28 million. Fortunately, 3D social gaming can be done iteratively, but the costs are still very high. On the low end, it will take a team of 3-4 engineers six months to develop a title, with another six months of iteration, totaling a little over $1 million, before any promotion cost. On the high end, titles like Farmville that need Facebook, website, and mobile versions require teams of up to 100 people and already cost $20+ million/yr to develop and deliver. After the transition to 3D social gaming, these high-end social games will start to reach the development cost of console games.

The Competition is Coming
Zynga is clearly the leader in this new gaming platform and was the first to master the art of social obligation in a game – a friend helped you out on your farm, so now you need to help them out. However, every new gaming platform has a clear initial leader that blazes the trail for other game companies. Farmville is to Facebook as Super Mario Bros is to Nintendo and Halo is to Xbox. Eventually others catch up, and now companies like RockYou and EA/Playfish are starting to have results as good as Zynga’s new titles.

Well known franchise properties like Madden NFL and Civ have announced support for the Facebook platform. No doubt Disney/Marvel is right behind them. These games will get consumer name recognition, a ton of upfront investment, and great name-brand advertisers and offers. Some of these games will be released completely for free just to drive purchases of their console equivalents.

The Shift to Franchises
Zynga has great things going for it: two well known titles that can become franchises — Mafia Wars and Farmville. Zynga has figured out how to attract and retain the elusive 35-50 female demographic. And Zynga has figured out how to maximize casual gaming revenue via offers and virtual goods purchases. However, it is now competing against companies with massive gaming franchises that have all acquired companies with the talent to do exactly what Zynga is doing. Adding Zynga Live, its own destination site, is a great step in Zynga’s move to determine its own fate, but the company’s future is nevertheless contingent on the quality of its games, not its ability to leverage the Facebook platform. Historically, it’s been incredibly difficult to create a new game franchise. Rather than try to replicate Farmville and Mafia Wars into a bunch of similar titles like everyone else is doing, it’s time to double down an the franchise and make a Farmville 2 that looks a lot better and re-engages the existing audience that has gotten bored and moved on. Hey, Call of Duty Modern Warfare 2 pulled in $1 billion, and pretty much everyone who saw Iron Man is going to see Iron Man 2. Welcome to the big leagues.

Peter Yared is the founder and CEO at Transpond, and has 15 years of experience helping companies adapt new technology platforms. Peter was most recently the founder and CEO at ActiveGrid, a commercial open source company delivering the LAMP stack to the enterprise. Previously, he was CTO of Sun Microsystems’ Liberty Network Identity initiative. Peter was also CTO of Sun Microsystems’ Application Server Division. Before its acquisition by Sun, Peter served as CTO of NetDynamics, which pioneered the then-leading J2EE application server. Earlier, he was founder and CEO of JRad Technologies, an enterprise Java company acquired by NetDynamics.