It turns out glucose, the naturally-occurring sugar compound that provides energy to living things (including us humans), can be harnessed to power electronic devices, according to new research out of Joseph Fourier University in France. The breakthrough could have far-reaching implications for makers of medical devices ranging from pacemakers to artificial organs.

Scientists proved the technology by implanting what they are calling a “glucose biofuel cell” into the abdominal cavity of a rat and monitoring how it worked over the course of three months. The device successfully converted glucose and oxygen — already in the animal’s body — into usable electricity.

The secret behind the technology? Electrodes made out of compressed graphite containing enzymes that force the oxidation of glucose to generate energy. Notably, these electrodes are protected by a membrane that keeps the enzymes from flowing out, while allowing oxygen and glucose molecules to flow in. That’s the difference between this newest cell and prior, failed iterations. 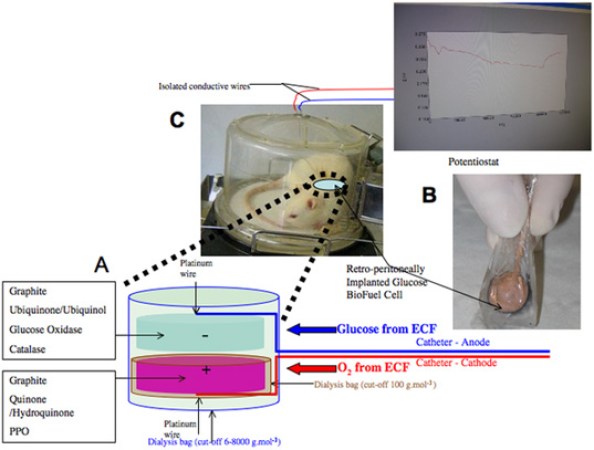 So far, the devices being experimented with are capable of putting out a maximum of 6.5 microwatts (though the average was 2 microwatts). To put this in context, 1 microwatt is equivalent to .000001 watts. A standard pacemaker requires 10 microwatts to remain functioning. If properly cultivated, the technology could very realistically reach this level in the next few years.

According to MIT’s Technology Review, this is the first time scientists have proved that electrical energy can be derived from organic body fluids. This statement alone has inspired hundreds of ideas for applications, and even more technical and ethical questions.

In addition to powering pacemakers, these types of glucose biofuel cells could eventually be used to keep insulin pumps and implanted medical sensors running for years. The development of artificial organs has also been a hot topic in biotech recently. There’s some potential that the glucose device could be integrated into these solutions. There’s really an endless list of possibilities at this point — but the technology is still incredibly young, and probably years away from practical or commercial applications.