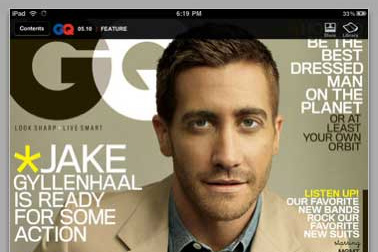 [Update: After quoting GQ’s publisher below in a story by Min magazine in New York, I got this email from a Condé Nast spokesperson:

“GQ told MIN  that 365 copies of the December issue were sold in the months of March and April (after the magazine was off newsstands). That was left out of MIN’s report.

“Additionally, there have been 57,000 purchases of the app since December – it is a combined iphone, ipad, itouch app (we do not have a breakdown of the numbers).”

OK, I’ll believe that. I fact-checked “we do not have a breakdown” and amazingly, Apple doesn’t give you one. Flurry and other analytics tools do.

At 57,000 downloads to iPhones rather than iPads, the story is a lot brighter. GQ will hopefully publish fresh content for the iPad soon to see how well it does.]

The average issue of GQ magazine is read by nearly 900,000 people, according to GQ’s informational brochure for advertisers. GQ is published by Condé Nast, the huge, powerful, and relatively successful publisher behind The New Yorker, Vanity Fair, and Wired.

GQ’s app is a digitized version of the magazine’s December 2009 issue, which featured the mag’s annual Men of the Year roundup. Since the app was presented as new, and Men of the Year was published with several different covers in December, it’s unlikely that iPad owners simply recognized the app’s content as a few months stale. More likely they just weren’t interested.

Publisher Pete Hunsinger told magazine-industry trade mag Min that he sees the trickle of downloads as success. “This costs us nothing extra: no printing or postage. Everything is profit, and I look forward to the time when iPad issue sales become a major component to our circulation.”

Min points out that in print, GQ is doing well. Ad sales for the June issue are up 40 percent over last year. Auto and fashion ads are coming back, Hunsinger said by way of explanation for the boost.

But what magazine apps lack is buzz. Aside from the ubiquitous New York Times and Wired’s ambitious tablet demo now being retooled for the iPad, glossy publications are not hot compared to games, social networks and turn-by-turn navigation.

So far, the publishing industry says the lack of an instant iPad readership explosion is OK. Regular readers will come to tablets, phones and other portable digital readers over time, just as Americans gradually went from ignoring SMS and ringtones to spending serious money on them every month.

But how long are publishers willing to wait for tablet readers to turn up? GQ’s numbers suggest that Hunsinger’s efforts would be better spent not on the iPad, but on an even better print edition.