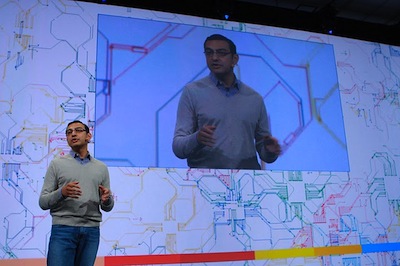 Google executives answered a number of reporters’ questions today about the company’s strategy for reaching enterprise customers. In contrast to its domination of Web search, Google is seen as an up-and-comer when it comes to enterprise tools, and Vice President of Engineering Vic Gundotra (pictured) offered the following answer about how Google might succeed: “It’s a matter of being humble.”

That remark might seem funny coming from a company that has a reputation for being pretty proud of its intelligence — in fact, when Conan O’Brien visited the campus, he referred (jokingly, but still) to “the incredible arrogance of you people.” In this case, Gundotra was referring to Google’s new platform for business applications, App Engine for Business. Rather than building the platform on its own, Google decided to take advantage of the reputation that VMware’s Spring technology has among Java developers, particularly enterprise developers. Gundotra added that Google has a real technology partnership with VMware, with integration between App Engine and VMware’s development tools.

“We in Google are not interested in marketing partnerships for the sake of putting two big names together,” he said.

Matthew Glotzbach, director of product management for Google Enterprise, also said that the company is seeing growing usage of Google Apps, its package of business applications such as Gmail. There are 2 million businesses running on Google Apps, he said (a number that Google has shared in the past). Many of those are small companies, but he said it’s becoming increasingly common for larger companies (who might have more trepidation about using web apps and who take longer to set up) to sign up as well.

Another reporter argued that large enterprises are always slow to embrace change, so they’re going to be resistant to what Google has to offer. Glotzbach countered that the “glacial” pace of enterprise innovation was tied to the traditional software release cycle, where new versions were released every three to five years, meaning that each update contained years’ worth of development.

By constantly updating a web application, enterprises can take a “versionless” approach to development, he said. That could mean that enterprises could develop applications at the same pace, but make their changes steadily and incrementally.