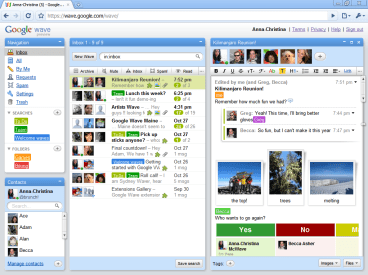 Google launched a public version today of Google Wave, a clever but complex tool that lets small teams of people collaborate in real-time without sitting in the same room.

Compared to Microsoft’s Office 2010 and Hotmail, which were debuted to the press in the past week, Google Wave cranks up the concept of real-time communications to the point where you can watch your coworkers type onscreen.

Google won’t actively hawk Wave against Microsoft’s workplace establishment of applications, but the free (and ad-free) Wave is meant to be used instead of, not alongside, Microsoft’s communications and collaboration tools.

Wave is hard to describe to people who haven’t used it, because it doesn’t fall into an existing, well-known software category. Wave users are able to have discussions that look sort of like email, except that the conversations updated themselves on the fly, onscreen, as participants type more into them. In parallel, Wave also hosts documents that can be group-edited onscreen. It’s sort of like mixing Twitter, Microsoft Office (or Google Docs, if you’ve used it), and online meeting tools such as WebEx and GoToMeeting. 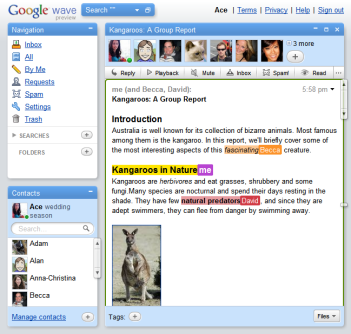 As an added twist, a software API allows users to hook up automated “robots” to Wave. One such bot, named Tasky, writes Wave users to let them know when tasks in a project plan are met, and when they’ve gone undone.

Unlike most collaboration tools, Wave shows group members’ typing onscreen while they are still typing. The result is a very live feeling of thinking together, rather than trading revisions of a document or replies to an email thread back and forth, in a sort of electronic badminton game.

Wave was released last year, but feedback from people who tried it could honestly be summed up as, “I don’t know what it is.” Since then, Google’s product managers have observed how Wave is used by the invitation-only test groups they allowed to try it out. Google spokesperson Sara Lim-Jew told me in a phone call yesterday that they’ve come to the conclusion that “Wave shines for small groups that need to work together.”

The real-time conversations and group editing of documents onscreen means that a geographically scattered collection of workers — typical for Internet-based software and site development these days — can get the feeling of being in a meeting room together. But Wave is also popular among some groups of people who work in the same office, because they don’t need to leave their individual desks to work together in a small group.

Wave has its critics. Many deemed last year’s version too hard to figure out. VentureBeat reporter Camille Ricketts, who participated in the invite-only trial, said that watching colleagues type their thoughts, then erase and edit them, was distracting and unnerving. Moreover, she was uncomfortable with the idea that others would see her half-baked sentences before she was ready to show them. The only solution. she said, was to completely formulate a statement before typing anything into Wave. Maybe they have a setting for that now?

Google has prepared a video that explains Wave’s positioning as a tool to connect small groups of people who work collectively, rather than taking marching orders from one leader. For now, the company isn’t making any revenue off Wave. It’ll be positioned as a Google Labs test product, free of charge for early adopters willing to live with any quirks. But that’s how Google News started, too.