Social gaming firm Zynga is moving from the virtual storefront to the real one in a broad partnership deal today with the 7-Eleven convenience store chain.

This summer, 7-Eleven will offer exclusive virtual gift products for Zynga’s FarmVille, Mafia Wars and YoVille social games on Facebook. The deal shows that Zynga is going after the mass market by teaming up with a retailer that is popular among young people. Nearly 7,000 stores will participate in the promotion, which is Zynga’s first major tie-up with a physical retailer.

It’s a sign of the growing maturity of social games and their reach into the mass market. Zynga hasn’t been viewed as a traditional video game company, especially by hardcore game companies. But this move shows that it is beginning to think big, just as companies such as Electronic Arts. EA stages big promotions for its EA Sports games in the name of making them ubiquitous. Here, Zynga is doing the same, though its audience is arguably much more mass market and casual.

Under the promotion, millions of consumers will be able to redeem exclusive virtual items with Zynga games during a campaign that runs for six weeks starting June 1. For instance, you can buy a real Big Gulp from 7-Eleven and get a virtual version as well. 7-Eleven will advertise the promotion across satellite TV, local radio, print and outdoor venues.

Consumers will be able to purchase specially marked products to receive a redemption code that can be used for a new, limited-edition virtual good in one of three Zynga games. That helps draw attention and traffic to Zynga’s games. Gamers can play those games for free on Facebook, but if they want to buy a virtual good within the games, they have to pay real money for virtual currency. When that happens, Zynga makes money. 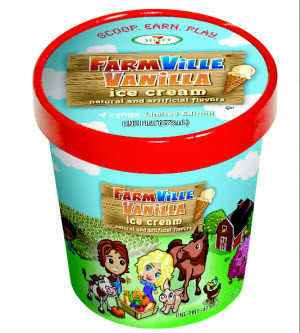 Consumers can earn gifts by  buying certain items and participating in at least one activity inside a game, such as mastering the growth of a crop FarmVille. If you do the activity, you can earn $200 in FarmVille virtual cash. Rita Bargerhuff, chief marketing officer at 7-Eleven, said it is one of the most unique campaigns in the chain’s history as it gives more than 30 product incentives to Zynga’s 239 million monthly active users.

“Through our promotion with 7-Eleven, we are expanding our reach and making our games more accessible to consumers,” said Vish Makhijani, senior vice president of business operations at Zynga.

The promotion runs through July 15 or while supplies and codes last.