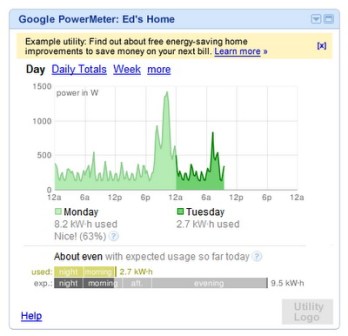 Google has just expanded the reach of its PowerMeter tool — the application that allows consumers to track how much energy they are using and how much they are paying for it in real time. Today, it added Current Cost, the world’s biggest provider of energy monitoring devices, as a strategic partner.

Since its launch last spring, PowerMeter has been gradually growing its audience. Initially, it was only available to customers of its utility partners, because it depended on the prior installation of smart meters (meters that can digitally transmit energy data). Then it landed key partnerships with Energy, Inc. and AlertMe, makers of devices that can do the same thing whether there’s a smart meter or not.

Now, the addition of Current Cost as a third, new device partner, makes PowerMeter available to many more people, turning it into a much more powerful offering. The company will be upgrading its products (including those already sold and out in the field) so that they can channel data to Google PowerMeter. Owners of Current Cost real-time energy monitors will now be able to view their energy use and costs — in real time — via their iGoogle start pages.

Current Cost built this upgrade using the PowerMeter API Google released in March — a harbinger of many other applications built on the platform forecasted to come. Its devices will be offered on the retail market, but also through E.ON, a major utility in the U.K. Particularly in Europe, consumers have more flexibility to choose which utility to use, making it more important for energy vendors to offer unique services and products, like home energy management systems.

This trend has already shown up in Texas, where the utility market is deregulated and consumers have more choice. As more states follow suit, this could become a major challenge for energy companies that aren’t used to aggressive marketing and competing for customers.

Google PowerMeter itself is facing some fierce competition in an increasingly crowded energy management market. In addition to a number of startups like Tendril, EnergyHub, and People Power, it’s facing off against Microsoft, and its web-based Hohm application.

Outwardly, Google says it isn’t investing that much time and attention in PowerMeter — that it’s just another do-good project out of its philanthropic Google.org branch. That may be why it’s not expanding as boldly as Hohm, which doesn’t depend on utility partnerships, and has already made big strides into automotive and appliance energy management.

But Google isn’t a company that is easily left behind, in any sector. It’s also been much more active in other energy-related areas, gaining approval to buy and sell energy on the wholesale market, and developing new, highly-efficient solar panel designs.

So it’s hard to believe that it doesn’t have grander designs for PowerMeter. This recent Current Cost, which adds a significant number of prospective users, probably foreshadows much bigger announcements — with much bigger-name partners — to come.