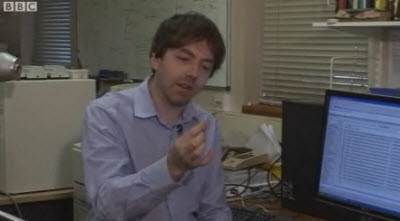 A British scientist says he made himself into the first human computer virus, according to the BBC.

Mark Gasson of the University of Reading in England said he inserted a miniscule radio frequency identification (RFID) chip into his hand. Normally, such chips are used to identify pets or open security doors. But the wireless technology in the chip can also be used to spread a virus to other RFID chip readers, which are often not protected.

Any chip reader that comes within range of the RFID chip in Gasson’s skin is susceptible to attack. That’s why it’s important for companies to start thinking about how to protect even the tiniest electronic equipment. This is important in a future where medical devices such as pacemakers and cochlear implants are infused with wireless computer technology.

“With the benefits of this type of technology come risks. We may improve ourselves in some way but much like the improvements with other technologies, mobile phones for example, they become vulnerable to risks, such as security problems and computer viruses,” Gasson said.

Embeddable chips are used in medical applications today, such as tracking the movements of Alzheimer’s patients.