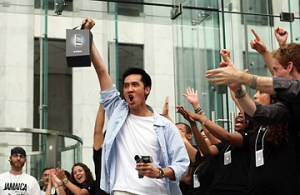 This guest column was contributed by Jack Gold, founder and principal analyst at J.Gold Associates.

Today, for the first time since December 19, 1989, Apple’s market capitalization exceeded that of Microsoft, catapulting Apple to the status of most valuable tech company. Market capitalization reflects what investors think about current sales but also measures the market’s expectation for a company’s long-term prospects. And right now, the market is saying those prospects look pretty good for Apple.

This is a stunning reversal. Just a few years ago, Microsoft was orders of magnitude ahead of Apple — and everyone else. While Apple and Steve Jobs deserve credit for running a great ship over the past few years, this is as much about Microsoft’s failure as Apple’s success.

Why did this happen? Clearly, Apple is firing on 12 cylinders – iPhone, iPad, increasing revenues for iTunes, and so on. Microsoft, on the other hand, has been stumbling. Windows 7 is a success, but only after the failure of Vista to deliver big numbers, giving Apple the opportunity to make inroads in the PC market. The Zune media player has not gained any significant momentum to challenge iPods and iTunes. Xbox is slipping against the competition.

Crucially for Microsoft’s future, sales of Windows Mobile phones have fallen sharply, and it’s too early to tell if Kin and forthcoming Windows Phone 7 models will stem this waning tide. While Apple continues to innovate and gain market share, Microsoft seems to have stagnated with little appeal to the newer generations of consumers. I’d currently put Microsoft at No. 3 in the mobile race behind Apple and Google in both innovation and the ability to garner excitement for its new products.

Apple has some challenges ahead. It can’t become complacent, as Google is nipping at its heels in phones and soon tablets with Android. HP is going to make a run at Apple as well, having bought Palm and its WebOS for more than just phones. And of course China Inc. — HTC, Lenovo, and Acer — is trying to compete.

What Apple does have is market buzz and retail channels in malls (Apple Stores) and online (the App Store). It also has the ears of developers, another area where Microsoft has fallen badly. However, Apple seems to be uninterested in embracing enterprise requirements that it can’t easily add to its products, so it will continue to have an uphill battle for acceptance in the business community where security and manageability are key.

Microsoft is at a crossroads: It must either innovate and regain some market momentum or continue on a path of slow decline. The recent departure of Robbie Bach was an indication that things will have to change and that top management recognizes this. But can CEO Steve Ballmer remake Bill Gates’ Microsoft, which birthed the PC era, into a mobile-focused giant?

Companies which rest on their laurels and forget to address market opportunities will lose. Microsoft has largely been a me-too innovator of late. Somehow it needs to regain its leading edge. If not, Apple and Google will continue to outpace Microsoft and capture market share, making Microsoft more and more irrelevant. Investors have figured this out. And by placing more value on Apple than on Microsoft, they’re voting with their brokerage accounts.

Jack Gold is the founder and principal analyst at J.Gold Associates, an information technology analyst firm based in Northborough, Mass., covering the many aspects of business and consumer computing and emerging technologies.