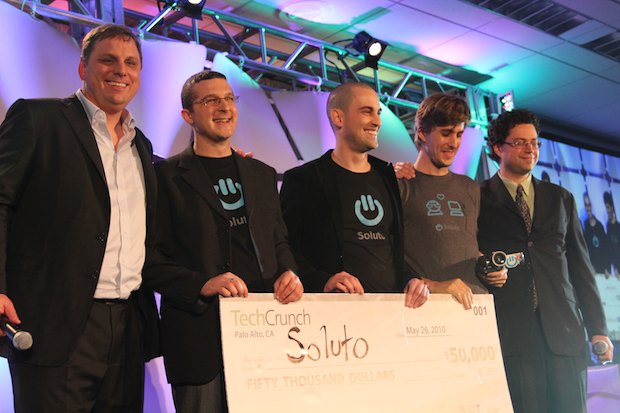 Twenty startups presented on-stage at the TechCrunch Disrupt conference in New York this week, and Wednesday night only five remained. Out of those finalists, the impressive music-making site UJAM, took the runner-up spot, and Soluto, a startup that has developed software to make computers perform better, was announced as the winner.

In addition to being one of the few startups at Disrupt to build desktop software, Soluto was also one of the most compelling and useful products at first glance. The company has basically crowd-sourced computer maintenance with its “anti-frustration software”.

Soluto’s software monitors your computer for a wide range of issues, including unstable applications, or programs that eat up too many resources. It then alerts you with various suggestions on how to fix them. The software also keeps track of your computer’s speed over time, and can show you if installing a certain application or driver made performance worse.

Here’s where it gets interesting: Soluto’s software also tracks how issues are fixed, and can alert other users with the same problem about the fix. In addition, the software can automatically fix the issue for users who pay a subscription fee. The manual version of the software will remain free, which makes it compelling for computer geeks who would rather fix their own computer problems.

Soluto sees the software as something that IT departments will adore (and pay for) at the enterprise level as well.

Its PCGenome project could also help users to avoid problems in the first place. With user-submitted data, Soluto can determine which software works best on different computers. That information could lead someone looking to run Photoshop as one of their primary applications to one brand and model of computer, and it could also make them aware of known issues with their current hardware.

Having worked in IT support for some time, what Soluto is promising has the potential to change the way average computer users interact with their machines. Instead of calling tech support when they have a problem, or begging a tech-savvy friend or family member to help them, users running Soluto could become more self-reliant.