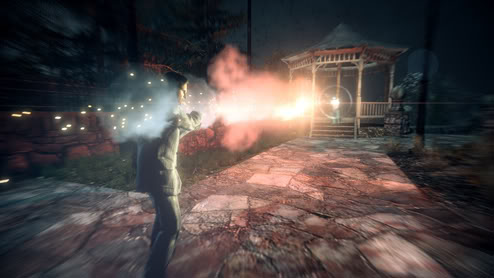 As I pumped battery after battery into my flashlight, I came to realize that the tension in Alan Wake is created through investment. Sure, hulking beasts biting at your heels can induce a certain kind of fear, but an emotion based in personal immersion is all the more exciting. Remedy’s long awaited title offers up a unique combat system and well-executed episodic structure, allowing the Finnish developer to hold players tightly within their grounded game world. Combined with a narrative that is instantly gripping, it’s hard not to get hooked, and my vested interest with both the characters and environment grew as each twist of the mystery was revealed.

Alan Wake blurs the line between cinematic experience and interactive game, leaning heavily towards Uncharted 2 as opposed to Heavy Rain. Playing as the distraught writer with the same name as the game's title, my time with Alan Wake was wholly intriguing. The episodic structure really lends itself to fast paced, tension filled storytelling, and with six chapters, the campaign is divided in such a way that every episode is stuffed with excellent gameplay moments and consistent plot progression. It's not that Remedy couldn't have established the same structure with typical levels, but the TV-series-like flourishes add a feeling of both completion and intensity to each episode, something that could've easily been lost with less demarcated missions. The recaps before each chapter help to transport you back into the game world, and the closing music montages boost the legitimacy of the serial structure to an unprecedented level. 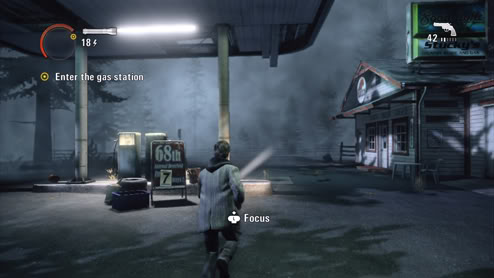 Complementing this style are the large and visible end-goal landmarks. The linearity of Alan Wake services the adventure far more than it hurts it, allowing you to see your destination from afar, and feel satisfied once you arrive at said location. Go to the gas station; reach the summit. Objectives such as these offer a visible goal and help to build an always moving semi-frantic pace; had the episodes ended instead with a daunting boss or crazy driving sequence, they wouldn't have felt nearly as complete.

I'm a huge fan of realistic game locales, and the town of Bright Falls fits the bill perfectly. Located in the Pacific Northwest, the fictional village in Alan Wake has everything you would expect from a lake vacation getaway. From the little diner to the trailer park, the game oozes with believability. This is substantially enhanced by the gorgeous graphics, though there are a handful of hiccups and oddly low-res moments. At night, Alan Wake is visually right there with the best of them. The forests and fog are eerily beautiful, and the lighting effects look down right spectacular. Unfortunately, some of the character models don't fare as well, but nothing looks too bad and the visuals are stellar all-in-all. 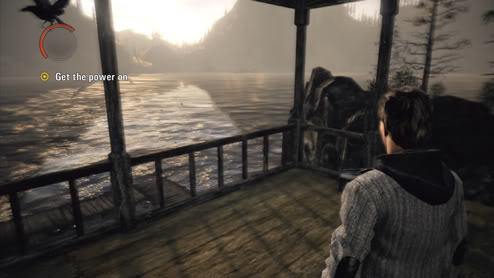 Despite being a shooter, Alan Wake is less about headshots and more about crowd control, elevating the combat above generic third-person gameplay. While some may find the action repetitive, I found the nighttime battles to be incredibly refreshing. As opposed to just aiming and popping, Alan Wake adds another layer, forcing you to burn away the darkness before blasting with bullets. Facing off against the Taken–humans transformed by darkness–your flashlight is both your reticule and your best friend. Highlighting a target not only allows you to see the demented attackers, but also to douse them in light and thereby remove their shields of darkness.

While you'll come across a few increasingly powerful flashlights, secondary light weapons are the more fun and strategic inclusion. Flares help to stun and keep enemies at bay, and flash bangs envelop the monsters in piercing light. Considering that all of the battles take place in pitch-black environments, you're bound to set up some stunning enemy takedowns. Drop a few flares to scare away the initial rush, and roll out a flash bang to deliver the killing blow: you'll be greeted with a glorious display of blinding illumination. 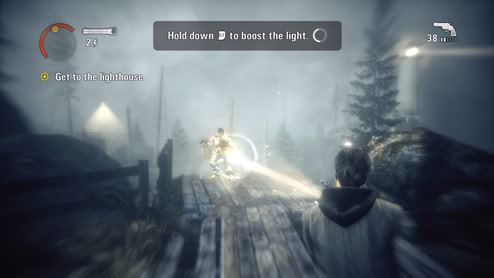 In terms of variety, the guns are all pretty much the same. Sure, the shotgun does more damage than the revolver, but the creativity comes in how you combine your arsenal rather than what specific weapon you use. And sometimes, running like hell and avoiding conflict altogether can be a worthwhile alternative. Maybe you're low on ammo (though there is plenty lying around) or maybe you're just creeped out by the insanely mundane mumblings of the dark mutants ("There are 65 billion cows and pigs in the world!") but regardless, sprinting for the safety of a lamppost or building can be just as intense as holding your ground. While there aren't many different kinds of Taken, I never grew tired of fighting or evading the opposition. The inclusion of poltergeists mixes things up, occasionally hurling a possessed wheelbarrow or metal pipe at poor little Alan. Everything is dealt with in the same general fashion, but the varying light sources keep confrontation fresh, establishing a game mechanic that matches the strength of the narrative presentation.

Some daytime driving sections split up the action bits, and though there isn't any immediate threat while beneath the sun, I enjoyed these tranquil moments. By including segments devoid of panic, the plot seems more balanced, and therefore makes the nighttime treks feel even more momentous. When you're not anxiously moving from point A to point B, there are plenty of viable distractions to lead you off the beaten path. These range from boring coffee thermos collectibles to really cool live-action Twilight Zone-esque TV shorts. You'll come across radios with relevant plot related broadcasts, as well as old televisions containing mini-episodes of 'Night Springs', the aforementioned awesomely fictional science mystery show. The paths themselves are just big enough that exploration is both encouraged and warranted, especially when you can't see what's beyond your immediate area. Darkness increased my curiosity, and finding a hidden weapon cache is much more rewarding when you're relying on a small beam of light to guide you along. Similarly, the scares in Alan Wake aren't due to blood or deformities, but rather the lack of visibility; when you’re nervously exploring a fog-filled cave, any movement in the dark can make you jump. 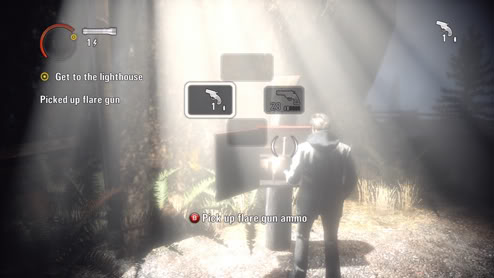 While these are fun diversions, none contribute to the narrative as directly as the manuscript pages. Without spoiling one of Alan Wake's major conceits, these pages contain snippets of story that directly foreshadow game events, and add to the tension by providing choppy details to a twisting Lost-style storyline. The entirety of this presentation adds to the mood of the game, lying somewhere between somber and psychotic. You'll frequently question what's really going on, and it's the perfect game to play after dark. Alan Wake is fantastic at any hour, but real-world nighttime significantly enhances the immersion, allowing the sound and atmosphere to creep further past the confines of your console.

Bright Falls is filled with signs that provide useless facts about the town, and along with the occasional sidekick, these increase the strength of Alan Wake's narrative. On multiple occasions, you'll find yourself paired up with an AI partner, providing additional dialogue, combat options, or both. Tag-teaming enemies is pretty cool, with one character handling the light while the other takes care of the guns. Conversation is also surprisingly well done, and Alan has a fair share of inner dialogue that expands upon in-game happenings. 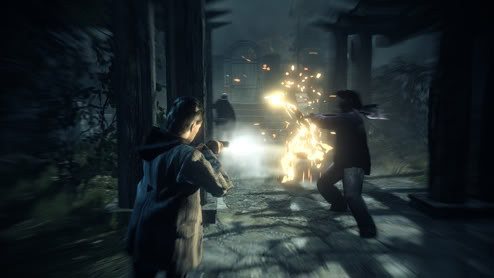 Approached piecemeal, Alan Wake is very solid, each component being both fun and engaging. But when whirled together into a complete twelve-hour ride, the game is extraordinary. Between the gripping plot and the offbeat fake TV shows, Alan Wake left me always salivating for the next bit of story, combat, or creep-out. Staging such an intriguing narrative within a seemingly real world environment pays off big time, delivering a legitimacy that isn't often felt while playing a game. The episodic tweaks enhance this cinematic style, and Alan Wake plays just like the psychological action thriller it claims to be on the front of the box. It took Remedy five long years, but the result was well worth the wait: Alan Wake is a masterpiece.