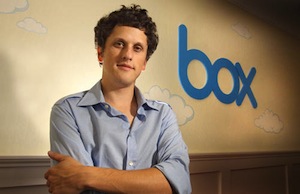 Document-sharing and collaboration startup Box.net is joining the growing wave of companies embracing the HTML5 Web format. This morning, Box announced a new feature powered by HTML5 (more on that in a second). And looking beyond today’s announcement, cofounder and chief executive Aaron Levie (pictured) sounds very gung ho about HTML5’s potential.

The Palo Alto, Calif. startup’s new feature lets you drag-and-drop documents directly from your computer desktop into the service. It’s not as if uploading documents to Box and similar services was a huge pain before, but this promises a more seamless experience. Right now it works on the Firefox 3.6 and Chrome for PC browsers, with promises of support for Safari and Chrome for Mac and Linux coming soon. Levie told TechCrunch that Box couldn’t have built the new drag-and-drop feature in Adobe’s Flash technology because of security issues.

HTML5 is often described as a competitor to Flash — a description that Adobe executives have resisted, saying that they see the technologies as more complementary, depending on what you want to accomplish. Scribd recently replaced its Flash document viewer with HTML5 and is reporting a big increase in the time users spend on the site. And Box itself uses Flash in a very cool way, offering a document viewer that helps users skip having to download a giant file or making sure they have the right desktop software.

Levie said he’s not just excited about HTML5 as an alternative to Flash: “HTML5 is the nail on the coffin of desktop applications because we can create this rich interactive experience that acts like a native app.”

A Box spokeswoman also emailed me the following comment: “As HTML5 gets broader adoption, we will look for further ways to implement it on our site, including the content viewer.”

Box has raised a total of $29.5 million in venture funding.