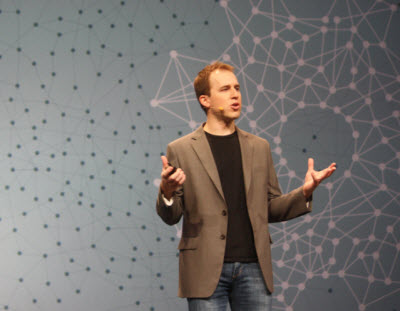 It’s been 10 months since Facebook bought FriendFeed, which arguably was its most significant acquisition since the company was founded. (Parakey was the other influential acquisition.)

The deal brought several senior hands on-board including Gmail creator Paul Buchheit and Bret Taylor, who shepherded a number of significant products through Google including Maps. Since then, both of them have taken very visible roles at Facebook with Taylor launching the company’s social plug-ins last month at the company’s f8 developer conference.

We caught up with Taylor to get his take on how he’s fit in with the company so far:

VentureBeat: How do you think you’ve influenced Mark’s thinking and the trajectory of the company?

Taylor: One the reasons we decided to join was we actually had a shared vision of how we wanted these social services to be integrated across the web. As for my own personal impact, it’s hard to say. In all of our conversations, it just became clear how our visions basically dovetailed. You could say I was in violent agreement with Mark.

On a practical level, I came in thinking the Facebook platform was too complex. There were too many application programming interface calls needed to accomplish basic social functionality. I thought the APIs had to be much simpler, and it turned out that a lot of my personal concerns about the product were shared. The product and platform have grown enormously and there’s been a need to simplify things, whether that’s fixing privacy controls or the API. So the simpler API is what we built and shipped at f8.

VB: How would you say Mark and Facebook’s culture has changed your thinking about the social web?

Taylor: One thing that Mark and I have talked a lot about is how the services that will be the most successful in the future will be ones that are built with social functionality in mind from day one. That’s what we’ve seen with the gaming industry. My favorite game growing up was Sim City. If you were to build that socially, you’d make all these changes — neighbors would make a difference, you’d build cities that are competitive to your friends’ cities. Social experiences in products can create an immense amount of value. Products like the Wii took something that was previously solitary and made it fun by involving family.

If you look at the partners we launched with at f8 like the Washington Post, we gave them plug-ins that would let you see articles your friends have liked. It gave your friends an editorial voice that wasn’t there before. If you build products with social connections in mind from day one, you’ll produce much better and more genuine experiences for users.

VB: What do you think is preventing Google, where you worked before, from launching more successful and mainstream social products?

Taylor: I left just before Google’s social efforts really began. I don’t have any personal insight into what is going on. When we develop products at Facebook, we don’t really focus on what our competitors are building. I can tell you that the reason why Facebook builds good social products is that this is just culturally what we do. It is our first order of business. And in general, it’s hard for companies to be successful at anything that’s not their core focus.

I will also say that you are ultimately a product of your surroundings. I was at Google for most of my career and the culture was very academic. We were focused on infrastructure and scalability. Facebook, from day 1, has been about social interactions, which has definitely colored the way I think.

My favorite example, which you already know about, was Facebook Photos. It was not a great photo product by any standard measure. There were no original-sized photos. There was no printing. It wasn’t developed like a traditional photo service. It just had this core piece of functionality — tagging– that made it the biggest photo product on the web.

VB: With the “like” buttons and the social plug-ins that you helped launch at f8, you’ll suddenly be collecting an immense amount of data — both explicit and implicit — on how people use the web —

Taylor: Let me clear something up. We are 100 percent focused on explicit data. We have pretty strict data retention policies. The implicit data is anonymized after 90 days. We use it to measure something called “like-through” rate so we understand how the buttons and plug-ins are used and how we can improve them.

VB: Are the “likes” factoring into ad targeting now?

Taylor: I don’t know. That’s not my area of expertise.

VB: Where do you think behavioral norms around privacy are heading over the next 10 years?

One of the things we learned from this is that we have to be very good about offering controls. But because we built so many controls, actual control was lost in the complexity. 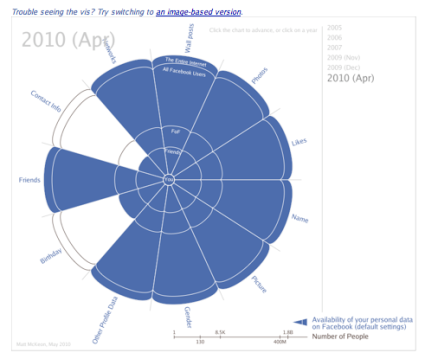 VB: But the defaults Facebook has established have evolved to be more public. There was this viral infographic (pictured left) showing the defaults making basic information becoming ever more public over time….

Taylor: We’re trying to make our settings reflect behavioral norms. I don’t think the graphic reflects reality for most of our user base. The majority of our users have customized their privacy settings.

If you think about Mark’s talk, when we first went international, people joined regional networks. And that meant that for Turkish users, their network was the entire country. So all Facebook users in that country could see their information. We had to change that. Furthermore, most of our users have signed up in the past year. People have signed up in vastly different environments with vastly different expectations. We’ve attempted to have our defaults reflect the norms of usage of the product.

VB: Mark has said in the past that people have a single identity no matter where they are, whether they’re with their friends or in the workplace. Can you elaborate on that?

Taylor: We’ve made this commitment to have one single real identity in the product and I think our long-term success will bear that idea out. Some people use it as a professional network; others use it for their friends.

Personally — and these are my own personal beliefs, not those of the company — I believe our society is becoming more open and accepting. I would never want to work for an employer who found my personal identity unappealing. I think that’s an antiquated notion. I hope our culture changes so that people become accepting both on the inside and outside.

VB: If you take the way space in the physical world is divided as a metaphor for online space, in the real world, there are very overt visual cues for where you are and who you’re communicating with.

The furniture and look of your office tells you to behave one way and the coffee shop where you’re talking to your best friend tells you behave another way. But on Facebook, all of that space is compressed to a single white status update bar and the only visual cue a user has that tells them who they’re communicating with is the tiny image of a lock.

Taylor: That’s an insightful way of looking at it. We have different communication channels on Facebook — your inbox might be your coffee shop and your wall is the place where your friends can reach out to you and instigate serendipitous communication with others.

We’ve talked about communication channels a lot and we’ve tried friend lists. Honestly, they’re not perfect, but we’ll definitely get there.