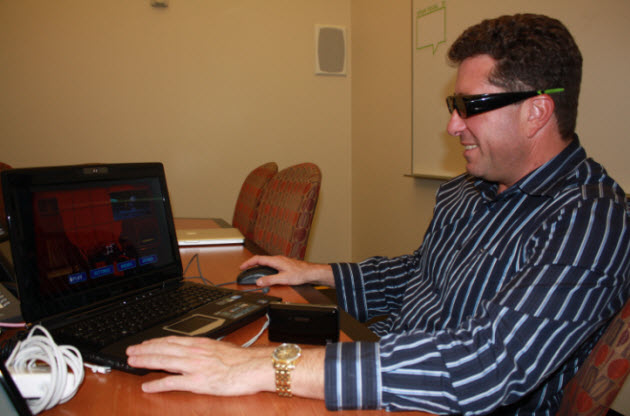 The latest 3D TVs haven’t impressed me yet. But looking at images with 3D glasses on specially equipped computers isn’t nearly so bad. Nvidia is making a big bet on 3D viewing as an extension of 3D graphics on two-dimensional screens.

The Santa Clara, Calif.-based company believes that 3D on the PC has gained momentum since the company began selling 3D glasses and other technology a year and a half ago, said Rob Csongor, vice president of corporate marketing at Nvidia. The company is announcing a number of milestones for viewing 3D imagery on computers today at the Computex 2010 trade show. I still think that 3D has a long way to go, but Csongor points out that 3D PCs have come a long way already.

Nvidia’s partners in its 3D PC alliance include Microsoft, Dell, Asus, Alienware (a division of Dell), Toshiba and others. [Update: To show off the progress, Nvidia streamed a 3D video of “We Are the World” over the web using 3D Vision, Microsoft’s Silverlight technology, and IIS Smooth Streaming technology. This demo shows that any 3D video can now be streamed over the web to a 3D PC].

To view things in 3D, you need a what Nvidia calls a true 3D PC. That includes a pair of active shutter glasses (made by Nvidia and sold via its 3D Vision kit), 120-hertz display and a discrete graphics chip in your PC capable of handling 3D processing. 3D TVs are just starting to ship and are still somewhat pricey ($2,500 to $4,000). But many computer monitors are starting to come with 3D built into them, giving Nvidia new hope for the 3D PC. Those monitors can display images at 120 hertz, (refreshing the image 120 times a second) which allows them to run at full speed and still process 3D images in real time.

There are now 425 games that can be viewed with Nvidia’s 3D Vision glasses, and 75 percent of new games being developed are including options for viewing 3D natively. Among the games that are now compatible with 3D is World of Warcraft, a fantasy role-playing online game world that has 11 million subscribers. Developers are now using both in-screen effects, where it seems like the scene you are viewing in a game has three dimensions and real depth to it, as well as out-of-screen effects, such as someone in a movie bouncing a ball at your face.

Six of the top 10 selling computer monitors are 3D capable. Asus is announcing this week a new laptop — the G51Jx-EE — that has 3D built in. And 3D cameras, which take pictures in three dimensions, are now hitting the market from companies such as Sony and Fujifilm. The Masters golf tournament was recently broadcast in 3D, and a number of cable channels (such as ESPN) have pledged to broadcast shows in 3D.

Nvidia says that gamers like 3D on the PC because it gives them an unfair advantage in multiplayer matches. Epic Games has now built 3D Vision support into its Unreal Engine 3 graphics technology, which is used by many game developers. YouTube has a few thousand videos available on a 3D channel, and improvements are coming soon that will let people view 3D video streams on the site.