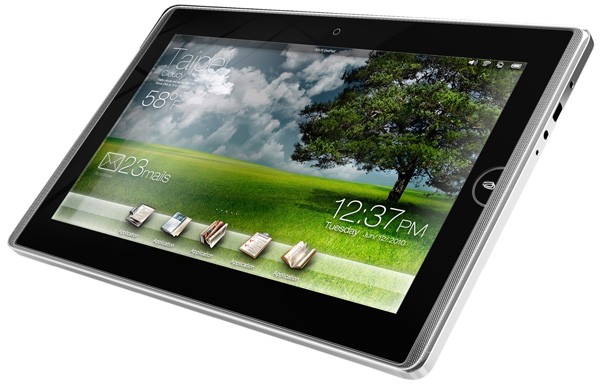 Computer makers Asus and MSI, who’ve seen great success lately in the netbook market, unveiled their long awaited tablet devices at Computex in Taiwan this week. But it doesn’t look like they’re ready to compete with the iPad just yet.

We reported in late March that Asus was readying two tablets — one running Windows, and the other running Google’s Android OS or Chrome OS. At Computex, Asus showed off the first entries in its Eee Pad line — the 10-inch EP101TC running Windows Embedded Compact 7 (an updated version of Windows CE), and the 12-inch EP121 running Windows 7 on an Intel Core 2 Duo CULV processor. Unfortunately, its Google devices were nowhere to be seen.

The EP121 marks the first time we’ve seen a CULV processor on a tablet. Up until now, they’ve generally been used in the new wave of ultraportable laptops that offer more power than typical netbooks at a slightly higher cost. It’s a worthy competitor to Apple’s A4 chip in the iPad. It has the added advantage of dual cores, and Asus boasts a 10-hour battery life on the device.

Meanwhile, MSI debuted the WindPad 100, a Windows 7-based 10-inch tablet powered by an Intel Atom processor. The company also had the WindPad 110 tablet on display, which was running Android on Nvidia’s Tegra 2 processor. The WindPad 100 doesn’t appear to be anything special, but the 110 looks like a stylish option for those holding out for Android-based tablets.

Asus is aiming for a $399 to $499 price range with the Eee Pads, but unfortunately they won’t be available until the first quarter of 2011. According to Engadget’s preview, the Eee Pads are still very early in development, so the company will likely need the rest of the year to polish the devices. MSI plans to bring out the WindPad 100 for $499 later this year, but the company still seems unsure if it will bring the WindPad 110 to market. If it does, it will sell for around $399 towards the end of the year.