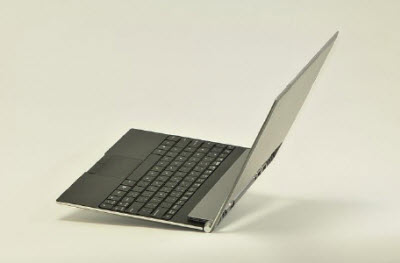 Intel is debuting new members of its Atom family of microprocessors today that can be the brains of everything from low-power laptops to razor-thin netbooks.

To show off the new technology at the Computex 2010 trade show in Taiwan, Intel is demonstrating its Atom chips inside a razor-thin “Canoe Lake” platform, which can serve as the electronics for a dual-core netbook that is just 14-millimeters thick (half an inch). With that size, the prototype netbook is the world’s thinnest such device. The thin netbook runs Intel’s “Pine Trail” version of the Atom processors.

Intel makes and sells microprocessors and chip sets that are part of computer platforms, or generic designs for the innards of a machine. Computer makers then take those platforms, customize them, and offer the products for sale. So Intel’s new platforms enable new products across many companies. The Atom family combines computing performance with low power, enabling Intel to get its chips into many low-power devices such as smartphones, netbooks, and tablets.  Intel recently said its latest Atom chips will use 50 times less power during idle operation.

One new customer for Intel’s Atom chips and Linux-based MeeGo operating system software is Chinese car maker HawTai Automobile, which will use the technology in future in-car entertainment systems.

Intel also showed its code-named “Tunnel Creek” Atom processor, which is a system on a chip. That is, it glues together a variety of chips into a single, low-cost chip that can fit in small devices. Tunnel Creek will allow other chip makers to connect their chips to an Intel processor. Intel also has more options that allow any of several operating systems to run on the chips, including MeeGo, Google Android or Chrome, and Windows 7.

Renee James, senior vice president and general manager of software and services at Intel, said that Asus will be the first computer maker to ship a pre-installed version of Intel’s netbook app store, dubbed the Asus AppStore, this fall. 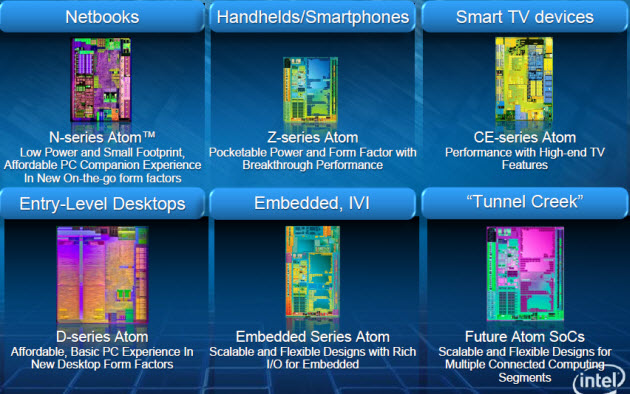