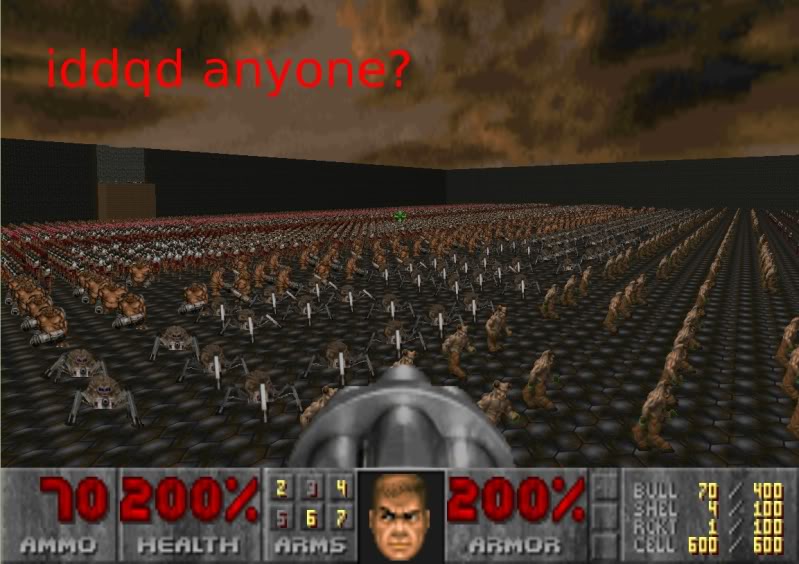 Doom II has finally made it to the XBLA almost four years after the release of the original Doom XBLA port with a new publisher, a new set of levels, and one very awesome super shotgun. The game, now more than 15 years old, has been played millions of times over: does this port show Doom's signs of old age, or does it succeed by bringing the classic to a new generation of gamers?

As far as old re-releases on XBLA go, Doom II sounded pretty underwhelming. Perfect Dark added new graphics and Banjo Kazooie hailed the return of interoperability between different Banjo Kazooie titles. Doom II offers up the same game that we've all known for 15 years and adds only a short new (balls-in-a-vise-grip difficult) chapter at the end.

Perhaps if Doom II was harder to find I would have been more excited about the eventual XBLA release, as I was with Ikaruga. Doom II on XBLA is, aside from the extra challenge levels, the same game that is available over Steam, on the Doom 3 bonus disk, and countless other places around the internet.

And then there is the price point: Doom II is twice the price of the XBLA port of its predecessor. While ten dollars doesn't seem too much to ask for a 40 level FPS with co-op and deathmatch, it is hard to justify the price when one of the reasons that the original Doom was so tempting to me was its 5 dollar price point.

These complaints, however, were immediately erased from my mind on firing up the antique arcade title. The nostalgia set in as I watched my childhood light up before me. No quibble I had with the nature of this port could bring down playing this game alongside my father most of yesterday afternoon, just as I had 15 years ago. Even though he hadn't touched a console controller since the Nintendo 64, and he likely won't any time soon, we both agree that it was an afternoon well spent.

The truth is this: Doom II is a fantastic game. I personally think that the level design is the best in the series. The level design is such that, while it is not a game for masochists, it is constantly challenging and while playing it, you are constantly panicking about a lack of ammo or health or both. The level design supercedes that of the original and, given its age, I imagine that there are many Xbox owners who haven't experienced the first-person relic.

The XBLA release doesn't contain anything new or shocking… nearly everything in this package has been done before. There is something to be said for the strength of the material that this is not a bd thing. People know what to expect here, and the package provides. Fans of the old Doom games will have a nostalgic blast while younger gamers might enjoy seeing one of Modern Warfare 2 and Halo's most prominent predecessors.

For fans of early 90s FPS titles or those who played the originals, I fully recommend picking this up, if only to play over Xbox Live instead of a complicated LAN arrangement. For those who never experienced Doom II's ubiquitous baddies and twisted level design, I would say download the demo and decide for yourself – the full game only gets harder and more maze-like with every new level.

All in all, I would say buy it. It's ten dollars to the company that is running Quake Live, is hopefully bringing Quake 3 to XBLA in the near future, and is working on Rage and Doom 4 alongside the new engine to power them both. Pick it up, if not because Doom II is an excellent shooter, to support id's future efforts. This one goes up alongside the sublime Perfect Dark and original Doom ports while avoiding the nauseating effects of Marathon and the staleness that came with Duke Nukem's realization that he had not aged well.