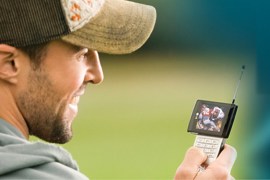 Americans and Europeans are several years behind China, India, Brazil, and many African and Latin American countries at mobile TV, according to a New York Times report.

Let’s be clear: This isn’t Internet streaming video. It’s mobile phones with tiny TV receivers built into them to pluck broadcast television from the air. Much mobile TV around the world is free, some is pay per view.

But in America, wireless carriers — Verizon, AT&T, T-Mobile, Sprint — have kept the technology off the phones they sell to consumers. Why? Because it gives people a way to use the phone without paying more money to the carriers, since the TV signal doesn’t pass through their networks.

Also, the technology requires TV stations to spend as much as $150,000 on new transmitter hardware. With no guaranteed audience, many balk.

A limited trial of mobile TV in America by a group dubbed the Open Mobile Video Coalition began in April across 30 television stations in Atlanta, Chicago, Los Angeles, Seattle and Washington. Broadcasters, media companies and advertisers hope it will capture mobile phone addicts who aren’t at home on the couch watching the big screen.

A Motorola mobile TV exec told the Times, “Ask anybody if they want to watch free TV on their phone. Everybody is going to want to say sure. The challenge is getting the mobile media marketplace to the point where content owners, carriers and broadcasters work out a business model.”