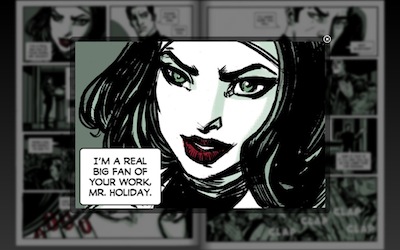 Coming off the launch of its popular Marvel Comics iPad/iPhone application, a startup called comiXology is moving beyond mobile devices and onto regular computers with a new Web-based comics reading site.

Thanks to the combination of an impressive content library, slick technology, and excellent timing (it was released at the same time as the iPad), the Marvel app got positive coverage and is currently the number three free product in the book section of Apple’s App Store. The content is Marvel’s, of course, but the technology comes from comiXology — in particular, the “Guided View” experience where the app glides smoothly between different comics panels. I found it more impressive than Apple’s own e-book reading application for the iPad, and for the first time I could imagine preferring an electronic comic book to a physical one.

Chief executive David Steinberger told me via email that the New York company’s overall strategy is “to make comics available to all people when, where, and how they want them, whether in print or digitally.” So it built an app for Marvel and promises more partner announcements soon. At the same time, it offers its own apps, including a digital comics store/reader and a tracker for what’s coming to your local comic store.

Asked how those strategies fit together, Steinberger wrote:

iTunes is designed such that the content within a store application (like comics in our Comics by comiXology app) is not visible or searchable at the top level of iTunes; Amazing Spider-Man gets buried inside our app. This leaves strong brands obscured beneath two or three layers of searching and clicking. Larger publishers want — arguably deserve — their own apps because they can bring a visibility and consumer reach that we can’t match yet.

For now, the new reader is in a limited beta test for comiXology users, who can read comics that they purchased via the mobile app as well as comics that are available for free. I played with the site a bit — the Guided Navigation feature works as well in the browser as it does on the iPad, though it lacks some of the “wow” factor of reading on the iPad. There’s no Web-based store yet, but the company says that’s coming. It also says the full public launch is planned for this summer.

ComiXology raised a seed round from angel investors including Rose Tech Ventures. It’s looking at raising a venture round now, Steinberger said. Competitors include Graphic.ly.