Panzura is announcing today it is diving into the market to provide web-connected cloud storage that is faster than storage devices attached directly to enterprise computers.

The San Francisco startup is creating what it calls Application Network Storage, and the first product to use this design is the Panzura Application Cloud Controller. The controller focuses on what application is using the storage device and on its data usage pattern. Basically, Panzura figures out how an enterprise application works and then decides how best to store data used by the application.

As companies consolidate a bunch of servers into one faster server, they can cut costs and improve efficiency. But a side affect of this is that they move data further from users. Panzura’s job is to configure a storage network to speed access to that data.

The Panzura controller inspects data packets and uses hardware acceleration to fetch or store data quickly. It also encrypts data so it can be sent over the network safely. It is designed to work with applications including Microsoft SharePoint collaboration software, which it can speed as much as 20 times when division offices are sharing the same data. Besides SharePoint, Panzura also supports other applications such as CIFS and NFS.

Randy Chou, chief executive and co-founder of Panzura, said that the company’s technology represents the latest evolution of enterprise storage. Panzura’s controller is able to move data across the world at very high speeds. The company claims it can save on cost, get by with less physical space, and improve security. 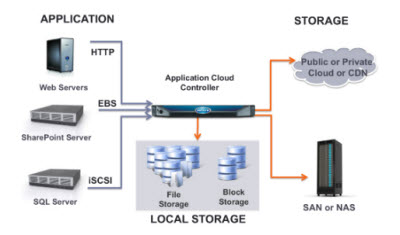 Among the partners teaming up with Panzura is Iron Mountain, which handles corporate backup and archiving services. Limelight Networks, a content delivery service, is also working with Panzura to marry Limelight’s service tightly with Limelights’ customers data storage devices. Panzura says a Fortune 50 company is using Panzura’s controller to upload huge amounts of data into the cloud at speeds of a gigabyte per second for backup purposes. A dozen companies are trying it out; several Fortune 50 customers are each generating six-figure revenues for Panzura.

The company was founded in July 2008 by software veterans Chou and John Taylor. They were both part of the founding teams at Aruba Networks and Alteon Websystems. The company has 20 employees, many of whom worked for the founders at their previous companies.

Rivals include StorSimple, Cirtas and Nasuni. Panzura claims it can beat those companies because its storage devices work better the more they know about the application using them. Running some of the application in the storage device itself enables it to deliver better performance than connected storage while getting benefits from the cloud such as easy backup and access.

The company has raised $6 million to date from Matrix Partners.