Mobile plans are ridiculously confusing. Voice, text messages, and Web surfing — it’s all data, right? Yet carriers make consumers guess — the minutes they’ll spend talking, the number of text messages they’ll send, and worst of all, the amount of data they’ll use in a month in order to avoid steep surcharges.

The only thing that’s sure: It’ll cost you. Mobile phone plans for typical usage of 800 minutes of talk time, 100 text messages, and 2 gigabytes of data typically run between $150 and $200.

When Apple and AT&T introduced iPhone plans, people complained about the expense. The one silver lining: They were unlimited. Now Ma Bell, by introducing new, capped plans, will have new iPhone customers once again play the guessing game. It’s a game only a regulated utility could love.

In the fiercely competitive world of Internet service providers, flat-rate pricing won out. Consumers loved it: They could budget against it. Here’s the good news: AT&T is mounting a last stand against a flat-rate wireless future. With new gadgets, and new wirelss technology, your phone bill will soon be a flat $60 a month, tops. 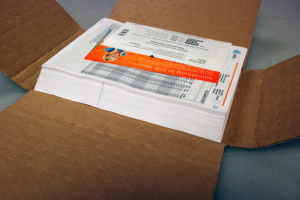 Wireless carriers would like you to think voice and data are different. They’re not. When you talk into your mobile phone, your voice is digitized in real time and transmitted as a data signal. Apps that use your phone’s data connection to transmit voice, such as Skype and Google Voice, do the exact same thing.  The only difference is that you are not paying for “minutes of talk” with those voice-over-Internet apps.  You only pay for data, and voice calls do not actually use that much data. The industry standard for a voice call is 64 kilobits per second. Compression cuts that in half. So 800 minutes of talk time amounts to less than 200 megabytes  of data. In that context, Apple’s rejection of a Google Voice app for the iPhone suddenly makes a lot of sense, since Google Voice gives you a phone number and the ability to send and receive text messages, all over a data connection.

Every once in a while, new products present such glaring price disparities with legacy products that everyone realizes what something is really worth. Such a seminal moment occurred in 1996, when AOL moved to a $19.99 monthly flat rate for dial-up Internet access and killed off its remaining pay-by-the-hour competition. It happened again in 2002, when Rhapsody offered unlimited music streaming for $20 a month.

A similar watershed moment is happening in the mobile data market as faster wireless networks are getting lit up across the United States. The hot new devices are mobile hotspots like the MiFi or Overdrive, which connect to third- or fourth-generation wireless networks and rebroadcast their Internet connections as Wi-Fi signals, which almost any device can connect to. Verizon and AT&T are shipping 3G mobile hotspots with 5GB/mo. — the equivalent of 20,000 minutes of talk time, remember — for $60 a month. Sprint is shipping a 4G mobile hotspot with unlimited, high-speed 4G data for $60 a month.

That’s down considerably from slower 2G data services road warriors used to hook up their laptops, which ranged from $80 to $100 a month. Unlike cell-phone voice and data plans, which always seem to be creeping up in price, mobile hotspot plans are getting faster, cheaper, and delivering more bandwidth.

The digerati are starting to do the math. A few weeks ago, I had a meeting with Jen Herman, an old-time mobile entrepreneur who is now at Zynga, who turned me on to a new trend: coupling an iPod Touch running Skype or an unlocked Android handset running Google Voice with a small MiFi hotspot. Some people keep it in a purse or backpack, while others just velcro it to the back of the handset.  The handset uses the hotspot’s Wi-Fi connection, which in turn communicates via 3G or 4G to the carrier.  This geeky setup offers everything you’d get from a $200/mo. smartphone plan and more: voice, text, mobile data, and a connection you can share with your laptop, iPad, and any other gadget you might carry.

Right now, mobile hotspots are the province of the technically savvy. But the writing’s on the wall. Sprint’s aggressive 4G pricing will force AT&T and Verizon to match. And $60 a month is just the beginning, as competition drives prices down. The best part: We won’t just save money when the wireless guessing game comes to an end. We’ll save time. And we can spend that time coming up with clever new things to do on the network.

[Photo: me and the sysop]

Peter Yared is the founder and CEO at Transpond, a developer of mobile social apps. Peter has 15 years of experience helping companies adapt new technology platforms and was most recently the founder and CEO at ActiveGrid, a commercial open source company delivering the LAMP stack to the enterprise. Previously, he was CTO of Sun Microsystems’ Liberty Network Identity initiative. Peter was also CTO of Sun Microsystems’ Application Server Division. Before its acquisition by Sun, Peter served as CTO of NetDynamics, which pioneered the then-leading J2EE application server. Earlier, he was founder and CEO of JRad Technologies, an enterprise Java company acquired by NetDynamics.