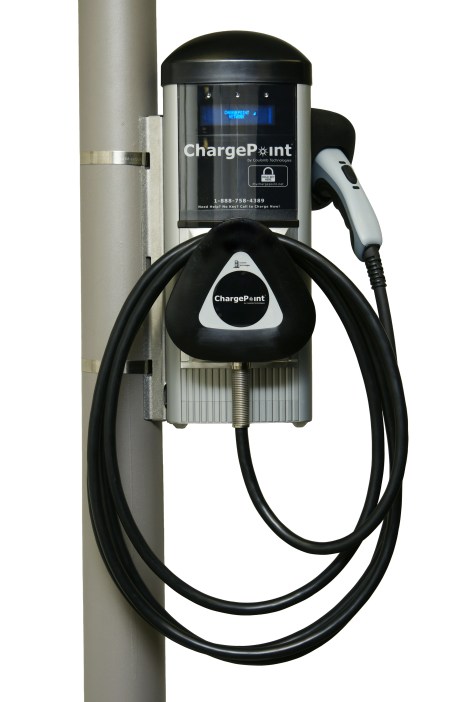 The news comes at a tenuous time for electric car makers and electric grid operators. On one side of the equation, companies like General Motors, Nissan and Fisker Automotive are gearing up to launch their plug-in vehicles by the end of this year. On the other, utilities and grid companies are rushing to upgrade equipment and establish programs to ensure that the spike in demand accompanying EVs won’t cause rolling brownouts and blackouts.

Companies working on the new infrastructure for electrified transport — like Coulomb, and its indirect competitor, Better Place — sit at the intersection of these two issues, at once hoping that plug-in vehicles will become commonplace while equipping the grid to handle these new cars as they hit the road.

It looks like Coulomb will be tackling the challenge of scale first. About half of its 4,600 ChargePoint Networks Charging Stations will be installed curbside in public locations so that anyone with a plug-in vehicle can juice up. Another 2,000 will be sold directly to consumers who have bought electric or hybrid vehicles from Ford, General Motors or Smart USA. All 4,600 are expected to be in the field by October 2011, Coulomb says.

As recently as a few months ago, people were still talking about the chicken-and-the-egg problem facing the plug-in vehicle market. Namely, that the cars wouldn’t sell unless there were enough charging stations relatively available, but that charging stations wouldn’t be financially viable until there were enough cars that needed them in the field. This is still a concern, but it looks like more infrastructure companies, including Coulomb, are confident in these cars taking off.

The company’s risk is further being mitigated by a deal with the U.S. Department of Energy, in addition to GM, Ford and Smart USA. Overall, the charging station rollout plan is expected to cost $37 million, $15 million of which is coming from the federal stimulus package to support the creation of thousands of jobs.

Also helpful is the constellation of deals the company has with municipalities to install their equipment. The thousands of new meters will be located in nine of these cities, including Los Angeles, Sacramento, San Francisco, and San Jose. This makes sense, considering that California has become the default real-world laboratory for EV technology. It’s also logical to restrict installations to cities where local utilities are committed to working with the company to make sure grid operations will be supported.

Because all of Coulomb’s stations are networked together, they can easily be tapped into by utilities so that they can respond to demand if it suddenly spikes. This should help keep local grids healthy. The data will also be collected and channeled into studies looking to improve EV infrastructure designs.

The software running on each of the charging stations also opens the door to a flock of unique applications. For example, plug-in vehicle drivers will be able to locate the closest stations on their smartphones and even receive text alerts when they should think about recharging.

It sounds like Coulomb is on a roll, potentially opening the field for other companies like it to deploy their own charging stations. After all, if plug-in vehicles catch on as fast as analysts and automakers believe, there will be plenty of business to go around. But several challenges still remain.

Perhaps most saliently, charging technology is still not simple enough to compete with traditional gas stations in the minds of many consumers. Juicing up your battery in your garage is one thing, but doing so on the go remains somewhat impractical.

Coulomb’s current charging stations pump at a capacity of 220 volts for most battery sizes. That means that a car could be fully charged in two to three hours. A partial charge — which is what Coulomb and others will most likely be marketing — would still take upwards of 30 minutes. This is going to require a major paradigm shift for people used to gassing up in less than 10 minutes.

That said, as these companies continue to refine their technology, charging times should shrink. But that’s unlikely to happen in time for the launches of the Volt, the Nissan Leaf, Fisker Karma or the all-electric Ford Focus in the next two years. It will be interesting to see how much use public charging stations get versus home-based chargers, and how that will impact strategy for Coulomb and its peers.