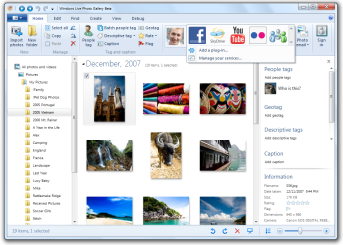 Microsoft’s Windows Live Essentials, a suite of free Internet-centric apps, is about to get a major upgrade in a few weeks, following the company’s announcement of its revamped Hotmail service.

I spent most of 2009 working on a Windows PC, so I got to know and trust these apps. Compared to Office and Outlook, they’re slim and fast. Now, Microsoft is adding a set of key features that each had been missing compared to Google and Apple offerings. Plus a few features Google and Apple haven’t done yet.

Brian Hall, the general manager of Windows Live, gave me a walkthrough of the upcoming upgrade over the phone this afternoon. Here’s what’s included, and what’s new for each app:

You can spot the direct competition with Google Apps, and with Apple’s iLife and Mobile Me. And in some ways, Windows Live Essentials wins out of the box. It’s free, unlike Apple’s iLife and Mobile Me. It doesn’t run everything in a browser window as Google Apps does, nor does it count on a constant broadband Internet connection. It’s a pretty smart mix of desktop and cloud use that, yes, is designed to make you loyal to Windows, but in a totally different way from the forced dependencies of Internet Explorer circa 1997.

Hall says the Live Essentials apps will be updated often with new features, which is possible because they’re lightweight, downloadable apps that use the cloud rather than packing gigabytes of software onto the PC to do everything standalone. That also means Microsoft can update the cloud part of Live Essentials whenever it needs to, instead of nagging you to install another time-consuming Windows update.

Will these apps make people switch from Mac OS X and Linux? Of course not. But for PC users who use the computer to socialize rather than to produce work, Live Essentials can turn a cheapo netbook into a fairly powerful cloud workstation.