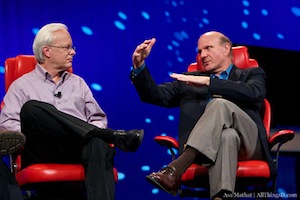 Confused about why Google is developing two different device operating systems, Android and Chrome OS? So is Microsoft chief executive Steve Ballmer, according to coverage of his on-stage interview at the D8 conference this morning.

On stage at the Wall Street Journal-backed annual tech conference held in Rancho Palos Verdes, Calif., Ballmer discussed Microsoft’s competitors in the mobile industry. He said Android is significant on phones, though he’s not sure whether it will become a big deal on other devices.

Speaking of those other devices, Ballmer said he doesn’t understand why Google has both Chrome and Android. (Chrome began as an operating system for netbooks while Android targeted phones, but Google has plans for both to spread, so you could have Android netbooks and Chrome or Android tablets.) Microsoft is always struggling to bring more coherence to its operating systems, Ballmer pointed out, so why is Google starting out incoherent?

Luckily, Microsoft Chief Software Architect Ray Ozzie was on hand to answer Ballmer’s question: “Android is a bet on the past. Chrome is a bet on the future.” Android is still about installing applications on a specific device. Chrome OS is designed for a future where everything is online, in the cloud.

Still, Ballmer repeated his assertion that doing two operating systems is confusing. His advice to Google: Make one bet and pursue it.

Not that Ballmer should be feeling too confident himself, with Android and especially the iPhone outshining Windows. Ballmer said Microsoft has lost its lead and “missed a whole cycle,” but the team has been cleaned up, and Microsoft is going to execute consistently on its new ideas.