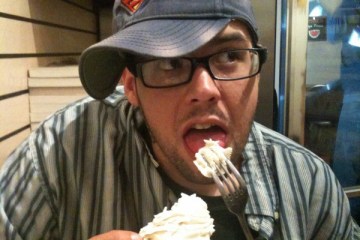 In its day, Bartlett’s Familiar Quotations, first published in 1855, was an impressive accomplishment. Thousands of quotes were traced back to their authors, and the results combined into a hardbound meta-book of human wisdom, wit, and sloganeering.

Today, Internet entrepreneur Drew Olanoff is trying to create the modern version: A crowdsourced, online quote archive that’s easy for readers of blogs and Twitter to update with whatever strikes them as worth saving for the ages.

Olanoff, who made an Internet meme out of his battle with cancer last year, has a reputation in startup circles as the sort of always-on, five-project-juggling guy who drives Internet innovation. He’s self-funding Qwotebook, a database-driven site that lets anyone enter a quote, plus some context as to where and when it was said and by whom.

“I had the idea three years ago, and registered the domain in 2007,” Olanoff told me in a phone interview. “I always felt someone was going to put a stake in the ground and build a quote site that wasn’t just about SEO,” by which he means that many quote sites seem to be Internet traffic traps more than gifts to humanity.

Olanoff’s day job is director of community for GOGII, a startup that makes the group-texting textPlus iPhone app. But he’s best known for Blame Drew’s Cancer, a goofball response to what could have been a fatal medical condition. Olanoff says he’s now cancer-free and unlikely to log off this mortal coil anytime soon. But the cancer “definitely made me do it,” turning Qwotebook from an idea into a live site.

Qwotebook’s gimmick is that it mixes the famous with the more obscure. “I think it’s great that a quote of mine can appear next to a quote by Albert Einstein,” Olanoff said. “Everything I’ve done on the web, and everything I use on the web is utility, it helps me with my life. I needed a place to put my quotes.”

A quick sampling of Qwotebook entries:

I have one quibble: If you’re not a Twitter user, you may struggle to figure out where to find the permalink URL to a quote. It’s hiding under the timestamp, e.g. the link that says “Qwoted two weeks ago.”

Does Olanoff plan to turn Qwotebook into a business? “I think there is potential for investment,” he said. “When I talk about it, I bring up music lyrics. They sell DVDs and CDs by being findable online.”