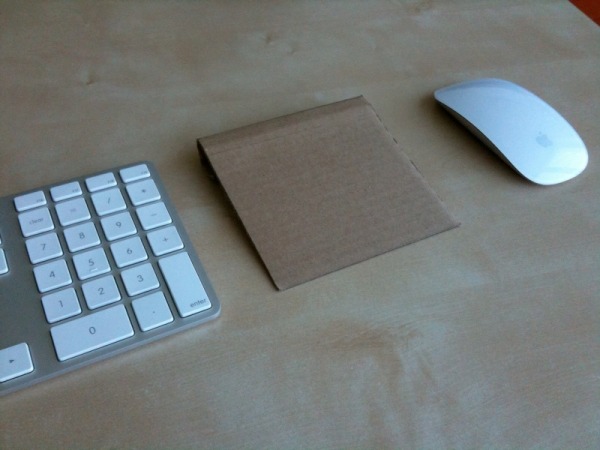 The most creative rumor circulating ahead of Steve Jobs’ onstage presentation of new Apple products, scheduled for 10am Pacific this morning in San Francisco, is that Apple will sell a new plug-in device that works like an iPhone or iPad touchscreen. Apple filed paperwork to trademark the name Magic Trackpad last week.

Remember that Jobs’ audience this morning isn’t the mainstream media, it’s a convention of software developers who build for Apple platforms. In the three years since the iPhone app platform went live, an estimated hundreds of thousands of software engineers have worked on apps for Apple’s portable touchscreen devices.

A USB touchscreen simulator would make software development for iPhone operating system apps much more facile. A programmer could plug it in and use it to drive prototype apps on a full-size computer. Engadget reader Dan Berte created a cardboard mockup to show how the touchscreen peripheral would fit onto a desktop.

The device could also be used as a complete mouse replacement, for Mac (and maybe PC?) users eager to declare the age of the mouse over. It would let iPhone users drive their desktop and laptop computers with the iPhone touchscreen gestures that have become muscle-memory reflexes for millions.