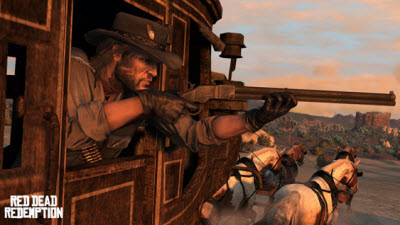 Take-Two Interactive Software said it has sold more than 5 million units of its Wild West epic Red Dead Redemption, and it is increasing guidance for its fiscal year as a result.

Those sales are so strong that the game could lift the fortunes of the entire video game industry.

Net income for the quarter was $16.9 million, or 20 cents per share, compared to a loss of $10.4 million, or 13 cents per share, a year ago. Analysts had expected 15 cents a share on revenues of $281.2 million. While earnings were higher, revenues were lower than expected in part because BioShock 2 sales tapered off earlier than expected, prompting numerous analyst questions about how quickly game sales are eroding after launch. Take-Two shares rose 1.3 percent in after-hours trading to $10.69 a share.

Take-Two’s challenge has always been to diversify beyond Grand Theft Auto, said Ben Feder, chief executive of Take-Two, in a conference call. It has done so with the launch of Rockstar’s Red Dead Redemption, whose results will show up in the third-fiscal quarter. I thought this game was the best of 2010 so far, mainly because it immerses you in the stories and atmosphere of an “open world” set in the Wild West. Other critics agreed, giving Red Dead Redemption an average Metacritic rating of 95 out of 100, far above average. It is good to see such a big bet pay off.

Although the game cost tens of millions of dollars to make, Take-Two said the title would be profitable in the third fiscal quarter and would become increasingly so over time. Feder said, “We are cautiously optimistic that this game has legs” to last beyond its initial sales. On June 22, the company will release its first downloadable content for the game. Overall, digital game sales via online titles grew during the quarter; digital sales were 9 percent of total revenue, up 20 percent from the prior quarter. Take-Two said it would actively seek to grow that business.

But with Take-Two, investors are accustomed to seeing bad news with the good. The company announced that Max Payne 3, another big game in development, will not ship in the current fiscal year. So the company predicts that it will have losses in both the third fiscal and fourth fiscal quarters.

The company says it has some big titles coming. Mafia II from the 2K Games label will start selling on Aug. 24 for the Xbox 360, PlayStation 3 and the PC. It is supporting the Apple iPad with selected releases, including a launch of Sid Meier’s Civilization Revolution. A number of new Nickelodeon games for kids are also coming. L.A. Noir, a gritty crime game set in the 1930s, is also arriving in the fourth fiscal quarter, as is Civilization V.

Those are some great titles, but people expected more. Strauss Zelnick, chairman of Take-Two, said that Rockstar won’t be appearing at the E3 Expo next week. Observers were hoping that Rockstar would start talking about Grand Theft Auto V. But clearly that game is not coming anytime soon. Zelnick said he remains cautious in part because of the delicate state of the overall economy. The company also confirmed that its 2K Marin studio, which made Bioshock 2, is now working on a title dubbed XCom.