Editor's note: We already knew that antagonistic jerks populate Microsoft's online service for the Xbox 360, but Meghan highlights new research about the specific vitriol that such ignoramuses direct at female gamers. While I'm not particularly surprised, such findings cause me to shake my head in shame. How can we maintain a space welcoming of everyone who picks up a controller? -Rob 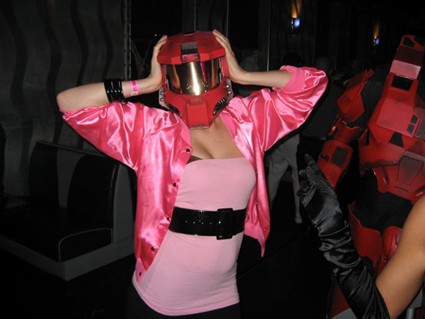 In the oftentimes un-policed, trash-talking culture of the online gaming world, insults seem to make up the digital air our avatars breathe. Most players know full-well that when they log onto a game with headset functionality and random strangers on the other end of the Internet connection, they will face an earful of verbal abuse. For female gamers, this experience can be even more abrasive.

According to a study by Jeff Kuznekoff and Lindsey Rose, doctoral students in Ohio University’s School of Communication Studies, female players received three times as many negative comments as males did during online-multiplayer Halo 3 matches.

“I thought there was something there. I wanted to see if there was something I could provide empirical evidence for,” Kuznekoff said. In the past, he researched obscenities in Halo 2. He said Halo 3 seemed like a natural extension of his previous projects. “It was noticing the gender aspects of it, like women getting yelled at, so that’s what really piqued my interest. There were really interesting things happening in this game that the communications discipline could help to explain and help us understand." 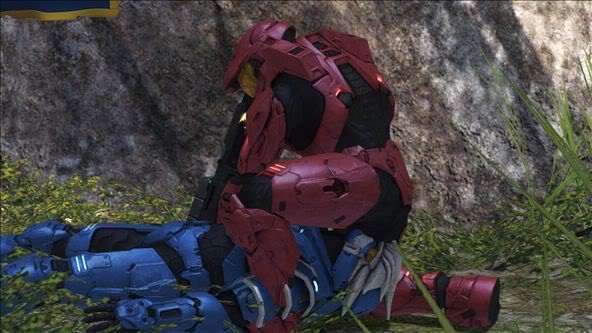 For the study, Kuznekoff and Rose recorded their voices saying neutral, non-threatening phrases — such as “good game” and “hi, everyone” — to play back during an online match and measure how gamers react to male or female voices. They used gender-neutral gamertags and the same blue Master Chief.

Coders analyzed comments for either directly negative statements, directly positive remarks (“nice job” or “thanks for the help”), or queries (questions to the gamer). The study also included a control variable where no voice spoke or interacted with online gamers. Over the course of nine to 10 months, their team played, recorded, and analyzed 245 matches (that’s over 20 hours of video and close to 700 gigabytes of data).

“There’s been a lot of research done on how females appear in the actual game, but there’s been very little that actually looks at what a female gamer brings in,” said Rose, whose research primarily focuses on gender. “We haven’t found anything else that looks at that dimension.”

The fact that female gamers aren’t particularly welcome in Halo 3’s online arena isn’t exactly shocking (and even less so for hearing in-game profanity and trash talking over headsets). Unfortunately, neither is the fact that a lot of the name calling was more than just saying girls have cooties.

“It was really a space where women were not welcome,” said Rose. “I would say ‘good luck, everyone,’ and they’d say ‘shut up, you whore.’ Things like that. They were pretty explicit.”

The female-recorded voice also received more queries than the male voice or control condition. “We recorded not just derogatory comments but queries, and women were asked questions three times as often as males,” Rose said. “And the questions [for women] were: ‘Are you hot?’ ‘Will you go out with me?’ When guys were asked questions they were content based — like how to play the game, and very functional questions.”

Kuznekoff and Rose surmises that the reason for the high amount of negative comments is related to the degree of anonymity in online games and the lack of consequences for gamers who use gender- or racial-based slurs. Even for experienced players, navigating through Halo’s in-game reporting menu can take 15-20 seconds, which is a valuable amount of game time, says Jeff. Furthermore, the efficacy of such reporting is unknown. Microsoft mostly bans players for modding systems.

With 1 to 2 million matches played per day, Kuznekoff added, the possibility of policing such a massive playground becomes unfeasible and unrealistic.

Dr. Mia Consalvo, a visiting professor at MIT and associate professor in the School of Media Arts and Studies at Ohio University who researches — among other topics — women in games, says rude behavior also depends on the kind of game and context. 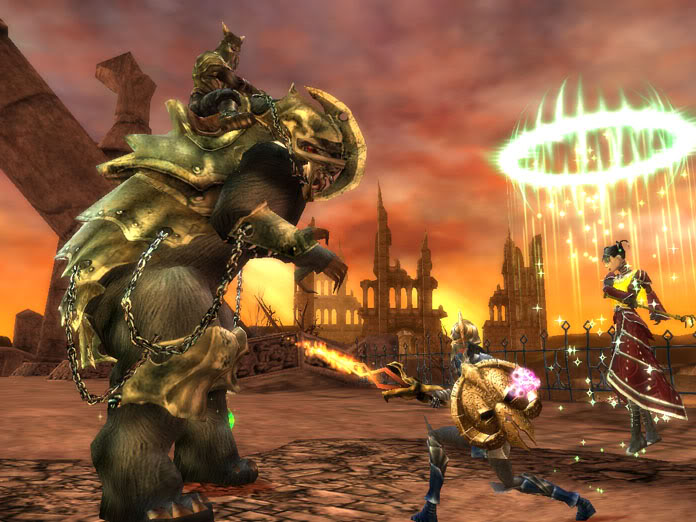 For example: In MMOs, you typically play for a while, join a guild, and maintain a persistent identity that primes gamers to treat their cohorts more like people. Without this persistence of identity, such support centers tend to crumble. Other players still harass women in MMOs, but it’s nowhere near the scope of competitive, one-on-one or team-based games.

“What do you have to go on to insult a person? There’s a name and maybe a voice,” Consalvo said, adding that players expect games like Halo to have a culture of trash-talking. “So, people will usually go for the easiest things. Racist and gender stereotypes are the usual shortcuts.”

While Kuznekoff and Rose's colleagues currently conduct a peer review the study, the pair will present their research at the National Communications Association Conference in San Fransisco later this year. Their study received first prize in the Graduate Category at OU's Research and Creativity Expo and the graduate student Library Award on May 13.

So, Bitmob community, what do you think? When you play Halo on Xbox Live do you use a headset or just mute everyone? Why or why not? How do you treat your fellow gamers?

Full abstract from study and photos of the poster presented at the Ohio University Research and Creativity Expo included on page two.

Abstract: This study examines how gamers react to gendered voice in a multiplayer video game. Past research indicates that video game content typically portrays women in stereotypical roles. However, much of this research focused on the content genereated by the gamers themselves.

In order to examine this area fruther, the researchers conducted an observational sutdy with an experiemental design to play in and record mulitplayer matches (N = 245) of the video game Halo 3. The researchers played against 1,660 unique gamers and broadcast prerecorded audio clips of either a man or woman speaking several phrases that could typically be used in a game.

Gamers' reactions were digitally recorded, allowing the researchers to capture exactly what was said and heard by the experimental conditions. Indpendent coders were used to conduct a quantitative content analysis of game data.

Poster pictures: Sorry about the day/time stamp. If you click the pictures, they'll open up in a bigger, more readable size. 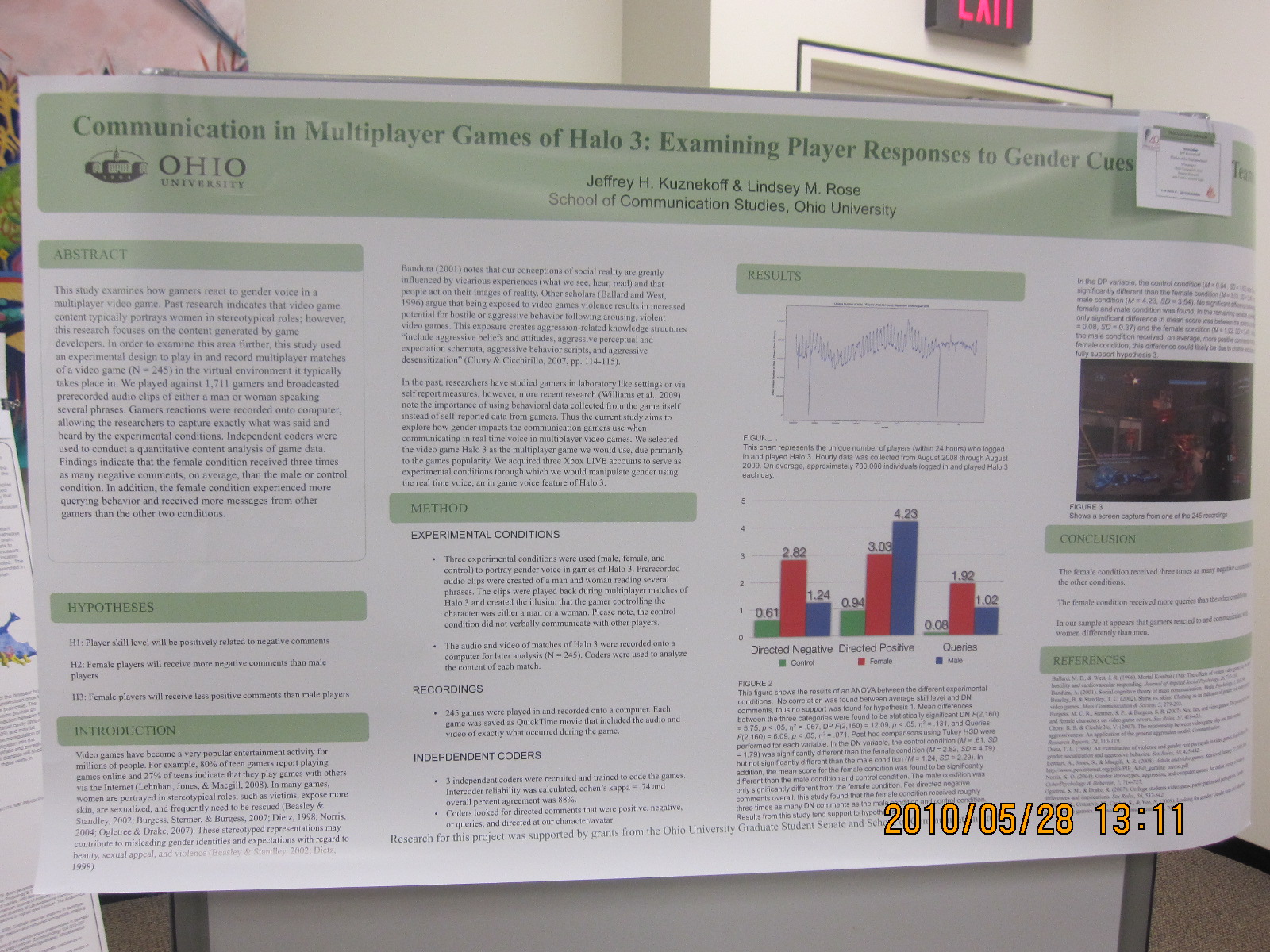 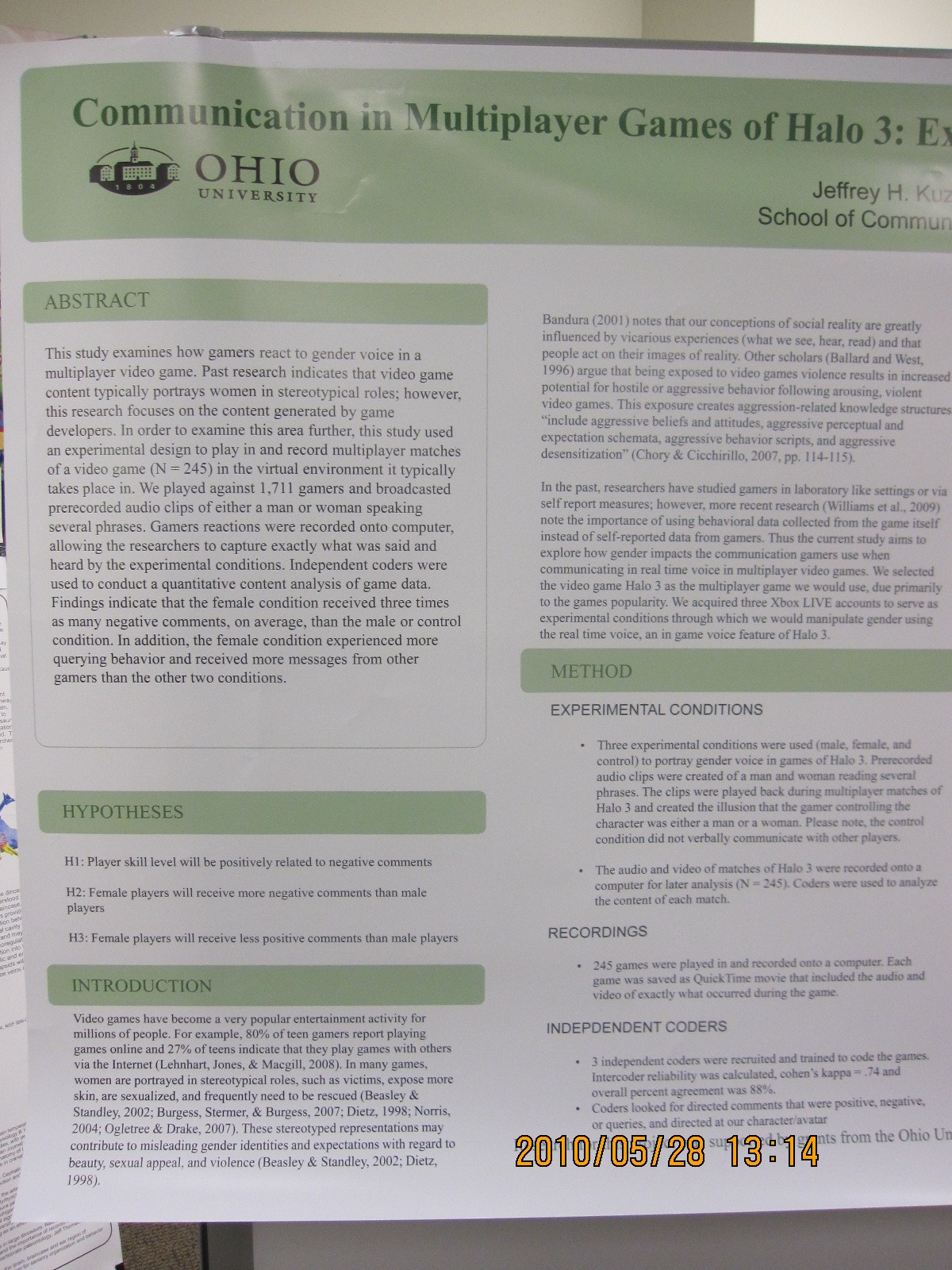 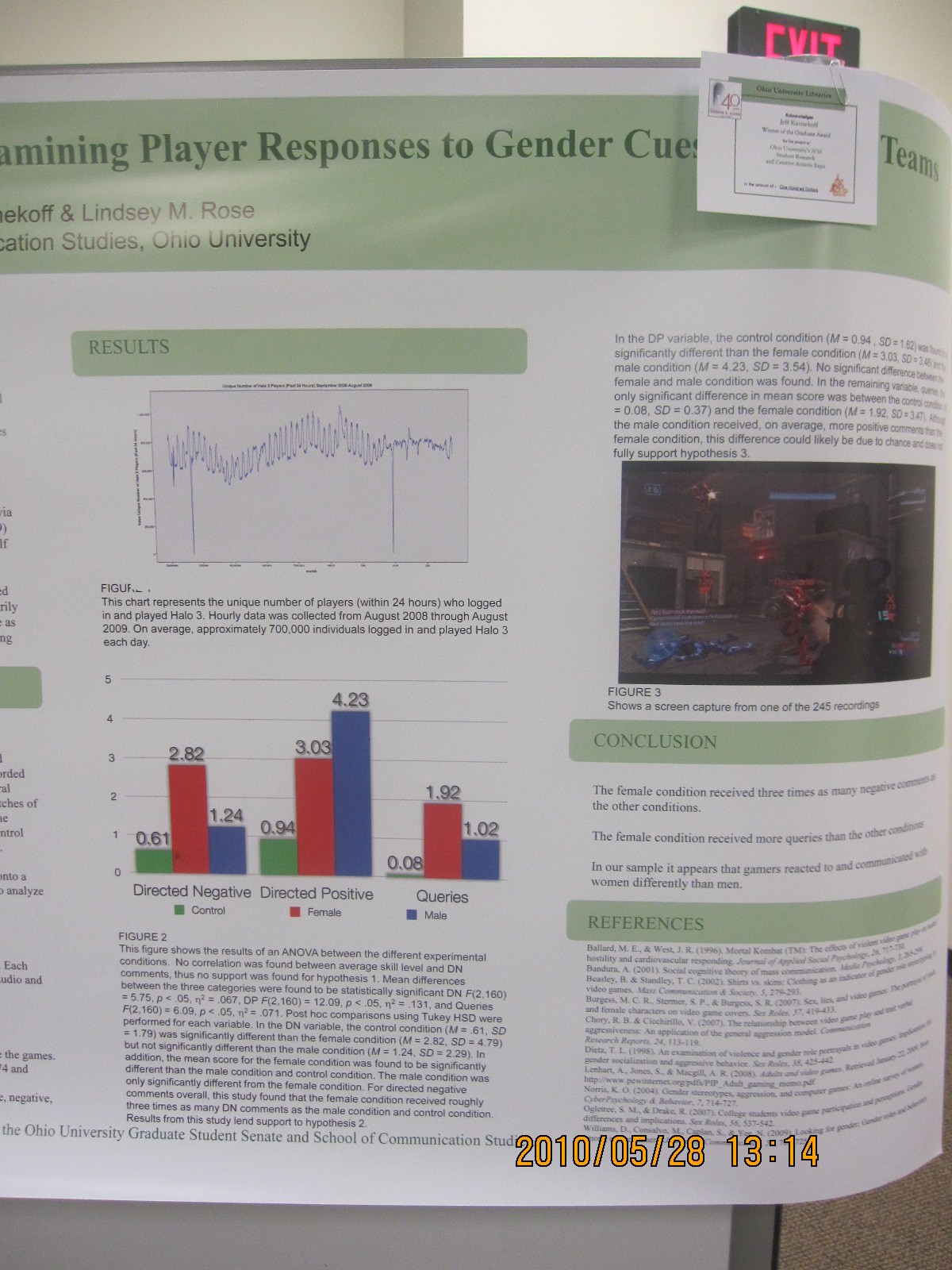