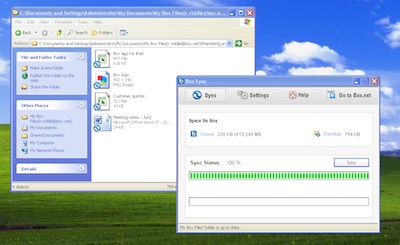 Today, collaboration startup Box.net is announcing what might be the most significant improvement yet — Box Sync, which synchronizes documents between Box and users’ computer desktops.

Box.net has been unveiling some cool new ways to interact with documents that you’ve stored on the site, including a feature to drag and drop documents directly from your desktop to Box, and a viewer that lets you read documents without downloading them. But the sync feature may boost its appeal to businesses.

Document synchronization isn’t new or unique. On the consumer side, there are products like SugarSync and Dropbox. But cofounder and chief executive Aaron Levie said the integration with the company’s online storage is key. Users can keep most of their files in Box, but also access copies of needed or in-progress documents on their computers. (For example, Levie said there are 33,000 documents in his Box account, and he wants to keep far fewer than that on his desktop. Most users probably don’t have quite as many documents, but the basic point is the same.)

When you edit a document, the copies in Box and on other computers are updated. If you’re offline, the documents will update once you connect to the Internet again. And multiple users can edit a document at once.

Levie said that’s very different from the approach of competing products like Microsoft’s SharePoint, which separate your online and desktop documents into “information silos.”

Box Sync is launching initially for Windows users with Box business accounts. Eventually, Levie said he plans to add Linux and Mac support, and to make Sync available to all of its 4 million users.

The news may be a bit surprising to readers who remember that Levie has been talking about the potential of the HTML5 Web format, saying that it will be “the nail in the coffin of desktop applications.” Why talk about the death of desktop software when Box is working on a feature that’s all about synchronizing documents on your desktop?

“We really see this as helping people get to this future state,” Levie said. “That’s why we’ve had to, in tandem and in parallel, while not necessarily conflicting with these goals … solve for where we are today as a culture and as a technology environment.”