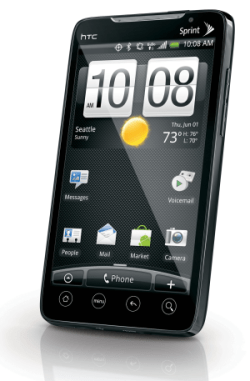 At an investor conference in New York on Wednesday, Sprint’s chief financial officer Robert Brust discussed why he believes fewer subscribers will jump to the iPhone 4 this summer, compared to previous summers which saw new iPhone releases. This time around, he believes that Sprint has a major weapon against the iPhone in the form of its Android-powered superphone, the Evo 4G, CNET  reports.

Every year since the launch of the iPhone, U.S. carriers have seen their customers leave for AT&T in the summer to grab the latest iPhone version. Last year, Sprint released the Palm Pre, the success of which was quickly undercut by Apple when it announced the iPhone 3G S.

Brust admits that the Pre wasn’t exactly the best device to combat the iPhone: “The Pre was for people who didn’t really want the iPhone,” he said. “But the Evo is a phone that people can get instead of the iPhone. We were in the distance last year and now we’re catching up.”

The Evo is Sprint’s first phone to support its next-generation 4G network, and it’s also the first 4G phone available in America. Sprint is working together with Clearwire to roll out 4G wireless across the country — they currently have over 44 million people covered, and hope to increase that to 120 million by the end of the year when they bring 4G to major markets.

The Evo 4G also sports a larger screen than the iPhone 4 (4.3 inches, compared to 3.5 inches), a fast 1 gigahertz mobile processor, and a front-facing camera just like Apple’s upcoming device. It’s definitely one of the most tempting Android devices out there, but given the many reports of battery issues, the phone not turn out to be the holy grail that Sprint wants it to be.