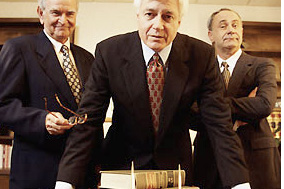 Two of the world’s largest mobile phone makers have come to terms on technologies that they’ve accused each other of stealing.

Motorola and Research in Motion issued a press release saying they’ve reached a settlement and license agreement “which ends all outstanding worldwide litigation between the two companies.”  In January, Motorola had filed a complaint with the U.S. International Trade Commission.

As part of the settlement, RIM will pay Motorola royalties for technologies it uses that Motorola claimed violate multiple patents related to wireless 2G, 3G, 4G, 802.11 and wireless email. The size of the payment was not disclosed, but it wouldn’t be surprising if it runs to millions of dollars per year.

Apple and Nokia are still engaged in a similar battle of conflicting USITC complaints that began when Nokia filed a complaint last December, which Apple countered in January. Both companies went so far as to request that the others’ phones not be allowed to enter the United States. Industry watchers believe both claims were meant to stall the arrival of competing phones in the U.S. market.