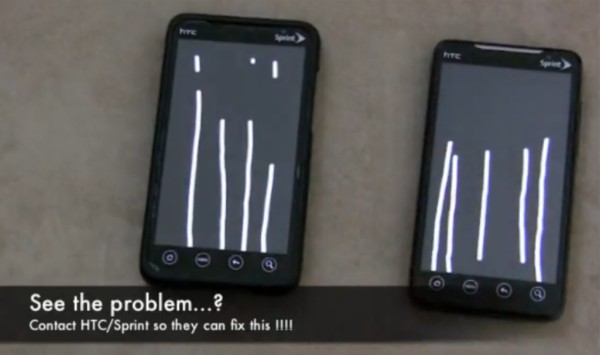 Update: We now have some ideas how HTC may deal with these issues in a more recent post.
—-

Sprint, which made a bad bet on the Palm Pre, isn’t faring much better with its new hero phone, the Android-powered HTC Evo 4G. While the superphone generated a significant amount of buzz before its release, complaints about the device started mounting once users got their hands on it. Most recently, many users are seeing issues with the Evo’s screen, including glass separation, as well as trouble with responsiveness (which also affects its sister phone, the Droid Incredible).

When the phone isn’t held in the hand, the touchscreen seems to have serious issues registering inputs. While not everyone is experiencing the issue, enough users are that it seems like more than a mere anomaly with a few units. If true, it’s something that couldn’t be fixed with a software update. Coupled with many accounts of screen separation, HTC and Sprint may have to initiate a hardware recall to fix the issues.

All of this is in addition to reports of terrible battery life, something MobileCrunch calls a “deal-breaker” for the device. HTC is no stranger to building high quality mobile devices, so it seems somewhat strange that so much could be going wrong with the Evo. It’s also bad news for Sprint, whose CFO recently said that he hopes the Evo can be a worthy alternative to the iPhone 4 for its customers.