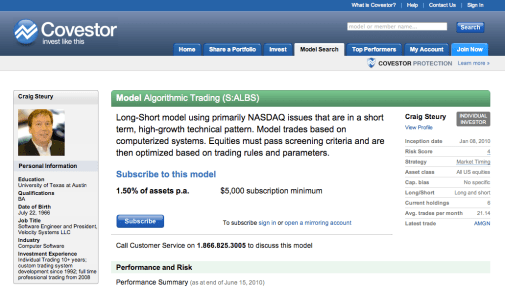 Social investing site Covestor, which lets you copy the trades of investors blow by blow, has helped moved about $100 million in such “replicating” trades, chief executive Perry Blacher said today.

It piloted the program for nine months under a separate brand, allowing visitors who committed at least $10,000 to mimic the trading behavior of almost 70 investors. Today the company is merging its experiment with the main site and making it a core offering. The company has about 30 employees spread across London, New York, San Francisco and Michigan, Blacher said.

The company isn’t cash-flow positive yet. It may be on the lookout for additional funding later this year, on top of the $10.6 million it has raised in two rounds from Union Square Ventures, Boston-based Spark Capital and London-based Amadeus Capital Partners.

Covestor is part of a cohort of startups challenging the traditional mutual fund industry, which manages $10 trillion for people primarily saving for retirement while taking a 1 to 3 percent cut in fees. These startups say the industry isn’t transparent — it’s difficult to discern whether fund managers are genuinely skilled or are beating market returns purely with luck.

Covestor says its model allows skilled individuals to earn fees for their talent and gives investors a way to find successful fund managers who won’t take nearly as large a cut as their traditional counterparts.

Covestor’s fees range depending on whether you follow a registered financial adviser or not. If a trader isn’t registered with the Securities and Exchange Commission, they earn a flat rate based on how many subscribers they have. If an investor is registered, Covestor will split overall performance fees with them 50-50. The fees usually range from 0.5 to 2.3 percent, and then there are the typical brokerage charges for each transaction.

Another Silicon Valley-based competitor, Kaching, has a similar model but with a lower entry barrier, with a minimum investment of about $3,000, while MarketRiders, yet another competitor, is more hands-on for wealthier investors who want to watch over their portfolio allocations directly.