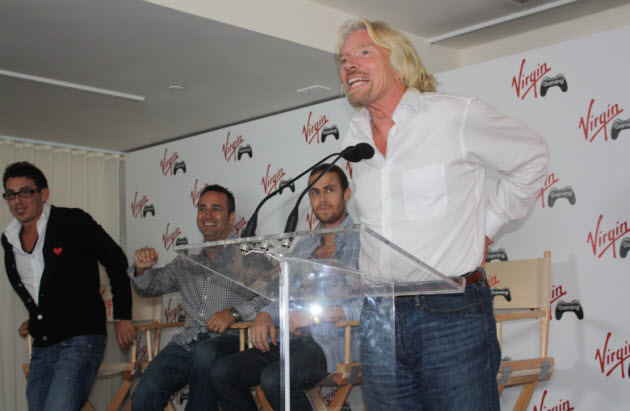 Billionaire Richard Branson has had the golden touch with many businesses in the Virgin Group. Now his company hopes to work its magic again with an all-new Virgin Games online gaming tournament business.

The company is announcing today it has made an investment in the online game tournament site Worldgaming.com and is rebranding it as Virgin Games. Branson’s move, which will be highlighted by his appearance at a press conference during the E3 video game trade show in Los Angeles today, shows that video games are gaining importance in the larger entertainment and media market.

“We’re not going to make games but to launch a new service,” Branson (pictured at podium) said in a press conference at the Mondrian Hotel in Los Angeles yesterday during the E3 video game trade show. “The idea was very Virgin. To help in an area that needs better customer service.” 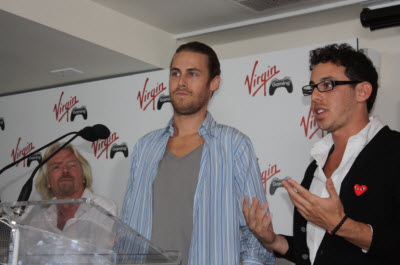 It’s also a heady move for Billy Levy (pictured, right), president of Virgin Games, and Zachary Zeldin (pictured, middle), vice president of gaming operations. When the two played way too many video games during their Florida university days, they fancied themselves good enough to try out for video game tournaments. But Levy says those events were always dominated by game superstars.

They started a tech business and sold it. Then Levy and Zeldin decided to start Worldgaming.com. They want to create game tournaments for the mass market of gamers who are competitive but don’t play every moment of the day.

“If you went to tournaments, it got expensive, as you had pay for gas, hotel and a fee to get in to play,” Levy said. “It was fun, but it would have been much more comfortable playing on my couch. As the industry moved online, we saw the opportunity.” 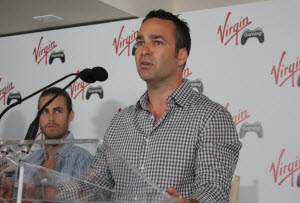 They started development of the technology in early 2007. Along the way, they teamed up with Rob Siegal (right), a former Sony executive, who invested a couple of days after hearing about it. Siegal is now chief executive. He also helped the young entrepreneurs meet a bunch of people in the game industry and then ultimately introduced them to Branson.

There couldn’t be a more different set of partners. Branson exudes confidence, swagger and majesty, while Levy and Zeldin were dressed casually and humble. They are essentially the gamers who never grew up. Zeldin said, “Excuse as this is our first major press conference.”

Branson was actually an early pioneer in video games. His company formed Virgin Games in 1981. The company made acquisitions and steadily expanded its operations, renaming itself  Virgin Interactive in 1994. It fostered some great talent such as David Perry, Louis Castle, and Brett Sperry. Sperry and Castle’s Westwood Studios made memorable games such as the real-time strategy games Dune II and Command & Conquer. But Virgin also made some major duds, such as the movie-based game Demolition Man. In 1998, Virgin sold the game company’s U.S. assets to Electronic Arts, while it unloaded the British game studios in a management buyout.

“Our first experience in gaming was a good one,” Branson said. “We were one of the few companies conceiving games in those days, with a great team in London and here. Virgin is great at creating and building companies. Once we have built a company, we often end up selling it and moving on to new ventures. It’s great to be getting back again and on the ground floor of a big opportunity.”

Beginning last year, the team started quietly testing the tournament site without much fanfare. In the tournaments, players can bet their own money (as long as they live in one of the 38 states that allow such skill-based gaming in the U.S.). They can set up a custom tournament in a very short time on platforms such as Xbox Live, PlayStation Network or the PC. If you want to set up a 64-person tournament, you can do it easily. There’s also training offered to help players get better. With no marketing, the site has 80,000 players who have collectively won $1 million. The site is accessible in more than 100 countries.

By the time talks with investors got serious, Worldgaming.com had proven its technology could work. So when Levy and Zeldin met with Branson, he was ready to get back into the game. The investment transaction closed in February 2010. With the Virgin name behind it, the marketing will kick in. The team sees this enterprise as the intersection of online gaming, social media, and contests.

Rivals include Worldwinner, which powers sites such as AOL Games, and King.com, which handles competitive games for Yahoo. Virgin Gaming will target males ages 18 to 35 who play hardcore games. As Microsoft has done with matchmaking on Xbox Live, Worldgaming strives to match players with similar skills. Players can win points that are redeemable on Virgin properties such as Virgin Airlines or some of Virgin’s 200 other businesses.

Over the next year, Virgin Games promises to give away $1 million in cash and prizes. Branson said, “they want us to give away space ticket and submarine rides. We will have spectacular prizes in the future.”

It will stage promotions through various retail and publisher partnerships. Virgin Games makes money via a 12 percent fee for each tournament. It also generates sponsor revenue. The company has 40 employees.

Will it succeed? Big players such as DirecTV have failed to establish competitive gaming as a spectator sport. On the other hand, Major League Gaming has been successful creating online tournaments and regional competitions. World Cyber Games also holds professional gaming tournaments worldwide. Another rival is Galaxy4Gamers. Branson said there are no plans for the company to make games.

“We hope we can achieve something similar,” Levy said.

Check out our video of the press conference’s beginning below.