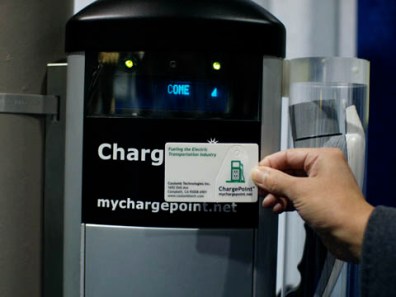 Coulomb Technologies, maker of networked charging stations for plug-in vehicles, has been growing steadily, rolling out its equipment one city or region at a time. Its technology is promising, but mass adoption still seemed far off. That may have changed today, with the announcement that the company has partnered with energy engineering giant Siemens, to co-market charging products.

Siemens has an extensive web of relationships with utilities, energy vendors, city and state governments, and automotive companies. Now these contacts will be at Coulomb’s disposal as well, giving them access to new types of deals. In particular, Siemens will be able to supply utilities, municipalities and the like with Coulomb equipment that can monitor energy consumption, run demand response programs, and provide accurate billing.

Siemens has its hands in almost every segment of the emerging cleaner, more efficient smart grid. It’s involved in energy monitoring systems, as well as solar and turbine development, and storage innovations. The deal with Coulomb to market its smart grid products alongside the ChargePoint EV charging stations, gives Siemens a new foothold in advanced automotive infrastructure, where it hasn’t been so strong yet.

Pike Research, which concentrates on cleantech, recently released a report that electric vehicle charging infrastructure could represent $297 million in new business in the U.S. alone and $1.5 billion globally in the next five years. This is a big market, and all of the corporate interests swooping in on the smart grid as it heats up are sure to get involved, including General Electric, Cisco Systems, and IBM, among others. Microsoft has already sliced into the pie, partnering with Ford to manage charging for its all-electric Ford Focus due out this year.

The alliance with Coulomb is very representative of Siemens’ approach to other pieces of the smart grid, including microgrids, smart metering, and grid-scale storage. It usually partners with smaller venture-backed players closer to the ground in each of these areas, just like Coulomb, in hopes of expediting distribution of its technology, bundled with what is already being rolled out.

The vehicle charging company already has ambitious roll-out plans in the hopper, stating earlier this month that it plans to install 4,600 new ChargePoint stations for plug-in vehicles in homes and commercial centers across the U.S.

Coulomb, based in Campbell, Calif., last raised funds in February, bringing in $14 million in a second round of capital. Before that, it raised a $3.75 million first round from Estag Capital in January 2009.﻿