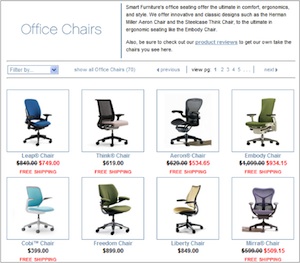 Google announced today that it’s giving Commerce Search, the search tool that retailers can install on their websites, an upgrade. With Google Commerce Search 2.0, retailers will have more control over the results, the company says, and more of them will be able to join the program thanks to a lower entry price.

Google launched Commerce Search at the end of last year, saying it wanted to replace the crusty old search programs that retailers were using.

The response has been positive, said Product Manager Niting Mangtani — Google isn’t sharing numbers, but it listed Birkenstocks, Discount Office Items, SmartFurniture, ChemistDirect, and Coveroo as customers. Discount Office Items was apparently able to increase its revenue by 6 percent within “a few weeks.” During a recent four-week period, total searches were up 145 percent compared to the same period last year, and revenue increased 90 percent compared.

But retailers wanted some changes, Mangtani said. Rather than having Google automate almost everything, they wanted more control over the user’s experience. That’s why the big change in Commerce Search is a new management dashboard.

Now retailers can decide what options users get alongside their search (for example, a furniture site can adjust the settings so that users can narrow their search results by product type, brand, or price), can set very specific rules for which products rank higher during search (so that a certain brand and price range is prioritized for laptop searches, while another brand and price is prioritized for office chairs), and also create limited-time promotions. Some of these features were available before, but retailers would have had to write code to make it happen. With the dashboard, they just select items from a menu.

As for pricing, the initial entry level price was $50,000 per year, which Mangtani said made Commerce Search affordable to approximately the top 500 retailers in the United States. Now it’s creating a new entry level with fewer searches and fewer items for sale for half the price, $25,000. That should double the potential audience, to the top 1,000 retailers. 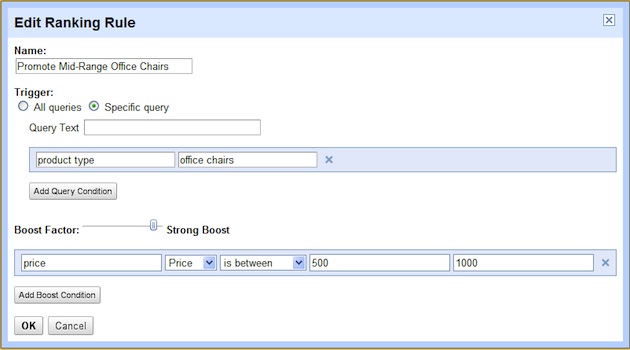