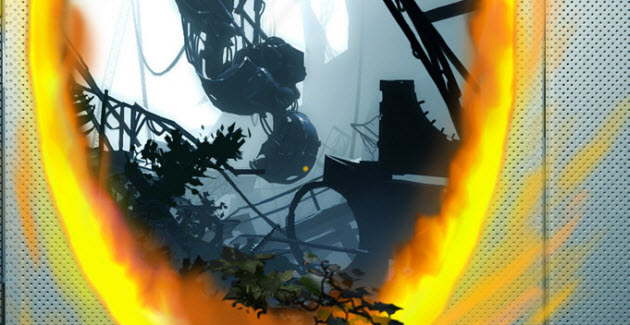 Portal was one of the most popular video games of 2007. Part of the allure was its humble roots as a title developed by independent game creators. At the E3 trade show in Los Angeles, game publisher Valve announced that it will launch Portal 2 in 2011 and revealed details of the game.

Portal was a single-player first-person shooter game conceived by students from the DigiPen Institute of Technology; they were hired by Valve, the Bellevue, Wash.-based game developer and publisher. The game had a lot of dark humor and unique mechanics. You could use your gun to short a “portal” in a wall. Then you could shoot another portal in a wall across a giant divide. If you then stepped into the first portal, you could emerge from the other portal on the other side of the gap. It was thus a clever way to get through puzzles. You could use physics to work through the many obstacles, all the while working with the computer artificial intelligence character named GLaDOS.

Portal 2 raises one of those big conundrums in video games. When something as unique and original as Portal hits the market, fans can’t get enough of it and demand a sequel. But sequels by their very nature are quite boring and unoriginal. It’s interesting that four years will pass between the launches of Portal and Portal 2. Hopefully that will give Valve enough time to come up with a creative story and unique game, even if it is a sequel. Valve is one of the most creative companies in video games, making titles such as Half-Life and Left4Dead. If anyone can pull off surprises, this company can.

The company announced Portal 2 in March and even scheduled a major event at E3. But after delaying the game until 2011,  it canceled the event and showed the game only behind closed doors. Doug Lombardi, vice president of marketing at Valve, said the new game will be about twice as long as the first game and that its environment will have plenty of mind-bending puzzles to solve. This game takes place several lifetimes after the first, although you play the same character who has been in a sleep state. You get woken up by a funny little computer character, which proceeds to train you how to play the game. And once again, you meet GLaDOS.

Check out the description of the mechanics of Portal 2 in the video below, which is narrated by Lombardi.