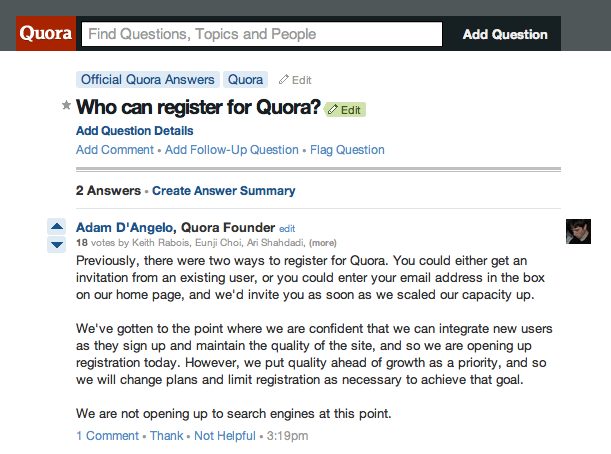 Quora, the hot Q-and-A site from Facebook’s first chief technology officer and a coterie of its early employees, is letting down its velvet ropes.

After a gradual and selective roll out since last winter, the company has decided that it has populated the service with enough quality answers and example behavior that it’s ready to let others in. But indexing by search engines is still off-limits.

Co-founder Adam D’Angelo wrote in an answer on the site:

“We’ve gotten to the point where we are confident that we can integrate new users as they sign up and maintain the quality of the site, and so we are opening up registration today. However, we put quality ahead of growth as a priority, and so we will change plans and limit registration as necessary to achieve that goal.

D’Angelo has said that the company is eager to establish itself as a reputable site with quality information. (See our Q&A with D’Angelo and co-founder Charlie Cheever from earlier this year.)

It’s kind of like a Wikipedia, but with lower barriers to participation. In it, people answer questions primarily using their real identities.

The design of the site brings together many best-of-breed innovations that have emerged from social networking startups over the last five years, including Digg-like voting for the best answers and asymmetrical relationships like “following” from Twitter. It also certainly helped that Cheever and D’Angelo populated their product with the entrepreneurs and investors who are the most in-the-know about the tech community.

The pedigree of the founders and the company’s devoted following helped it secure an $11 million round from Benchmark Capital in March. The big question now is whether the site can scale and still maintain a high level of quality and engagement.