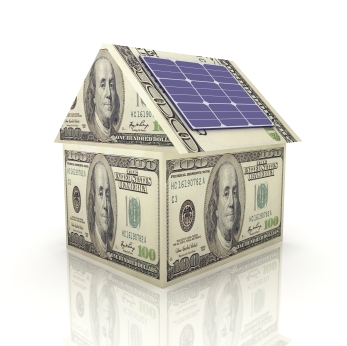 This is a huge win for SunRun, which has been locked in a dead heat with rival SolarCity — a firm that’s gotten a lot of press simply because it’s backed by Tesla Motors’ colorful CEO, Elon Musk. Both companies help homeowners find financing options that fit their budgets and desires, including relatively low monthly payments. But PG&E only signed on for $60 million, and 1,000 rooftops with SolarCity in March.

Based in San Francisco, SunRun also competes — albeit less directly — with Sungevity, a startup that uses satellite technology to measure and stake out roofs, and then help people pay for panels. It’s unclear whether its satellite spin will be enough to keep it afloat with the big boys in the space getting even bigger.

PG&E will be funding the rooftop systems in question via its subsidiary, Pacific Energy Capital II, a tax equity fund. Tax equity is usually the province of large banks. For example, SunRun took in $90 million in tax equity from U.S. Bancorp in December. Basically, it’s a tool to finance cleantech companies that receive support from the government. In lieu of traditional returns, the investor — PG&E in this case — gets tax benefits in addition to some cash returns. Considering how much tax equity has dried up among banks since the 2008 economic downturn, this is a pretty innovative move for the utility.

“We see this as a harbinger for the future — a company like PG&E entering into an arrangement like this shows that energy companies are seeing distributed photovoltaics as a real business that will grow and become ore important over time,” says SunRun CEO Edward Fenster. “This could be a turning point in the industry at large in terms of who is providing capital.”

The deals with both SunRun and SolarCity are part of a push by the utility to rapidly expand its solar presence. All told, it has allocated $1.45 billion, or $20 to $30 million a year for five years, to adding 250 megawatts-worth of solar energy to California’s grid.

With the money coming from PG&E, SunRun’s role will be to manage the financing deals — ranging from power-purchase agreements to panel leasing contracts — as well as the actual installations and panel maintenance. The program will cover California, Arizona, Colorado, New Jersey and Massachusetts.

SunRun will also be providing software for the metering, monitoring and billing operations associated with its panels. According to Fenster, the company’s financing business represents less than 10 percent of its headcount. Its software development team is actually much bigger.

In the past, SunRun has retained ownership of the panels after they are installed and has opted to charge customers for the power generated. That way homeowners don’t have to buy the panels, just the energy they put out. But the deal with PG&E restructures this system. Customer payments will instead be divided between SunRun and the utility. Revenue will flow to a limited liability corporation call SunRun Pacific Solar, which will own the approximately 3,500 systems installed. PG&E and SunRun are partners in this new entity, and will split different ratios of cash and tax benefits over time, Fenster says.

In addition to turning a profit, PG&E has a lot to gain here in terms of its public image. The utility has been taking a beating in the press lately over its smart metering plans. Ever since residents of Bakersfield, Calif. filed a class-action lawsuit against the company, claiming rate hikes following digital meter installations, public opinion has turned against the idea of slick, new — and potentially inaccurate — meters being installed in their homes.

Third-party accuracy testing revealed minimal inaccuracy, but it was enough to prompt the company to offer a public, poorly received apology. Now San Francisco’s city attorney, Dennis Herera, is petitioning the California Public Utilities Commission to block smart meter roll-outs in the city. He is arguing that the technology needs to be fool-proof before millions are spent on a new wave of installations. The San Francisco Chronicle ran an editorial supporting his position today.

On top of all that, Proposition 16, the measure PG&E backed to prevent municipalities and local governments from founding their own utilities, failed on Election Day. Not only is the company out the $46 million it spent on the campaign, it could be looking at a lot more competition soon.

So a big, high-profile investment in making solar power more feasible and affordable for average consumers looks like a pretty good move for the utility right about now. Its rate payers are enthusiastic about the integration of renewable energy; the alliance with a hot new company like SunRun could make it look eco-friendly and cutting-edge at once; and it’s boosting California toward its goal of generating 33 percent of its power from renewable sources by 2020.

For SunRun, this is the most recent in a series of plum funding deals. Before it scored the $90 million from Bancorp, it took in $30 million from Foundation Capital and Accel Partners.

“We will continue to raise capital, and will have some announcements in the near term about that,” Fenster says, emphasizing that the company is still working closely with Bancorp as well. “We have grown very fast in the last nine months, and in certain respects we’re shasing a shopping cart down hill, but a couple of new transactions are nearing the finish line.”

Located down the road from San Francisco in Foster City, Calif., SolarCity has raised $148 million, including its $60 million from PG&E. It started down somewhat of a different path in May, acquiring Building Solutions, a company that helps homeowners find the information and contractors they need to make their houses more energy-efficient. It’s unclear whether diversifying its offerings will give it a leg up over SunRun, or take its attention away from the growing residential solar financing market.