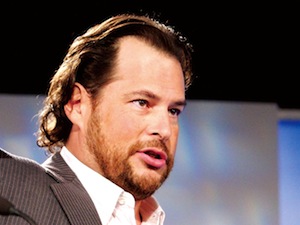 Benioff spoke in San Jose, Calif. at a launch event for Chatter, the company’s new social networking application for businesses. During that speech, he repeatedly took swipes at Microsoft, noting for example that there were Microsoft representatives handing out fliers outside the event. (On the other hand, Salesforce representatives are a familiar sight outside Microsoft events.)

The Microsoft-bashing may seem a bit incongruous — yes, the software giant offers sales software, but it’s main products aren’t Salesforce competitors. Benioff likes to paint Salesforce as the vanguard of cloud computing, while he describes Microsoft as a dinosaur that doesn’t understand these new technologies. And Microsoft’s recent lawsuit alleging that Salesforce violated some of its patents probably hasn’t improved feelings between the two companies.

“Microsoft wants this cloud thing stopped,” Benioff said. “I guess you know you’ve made it in software when Microsoft is protesting your event. Or maybe when they’ve sued you. This is the greatest thing that’s ever happened in my career.”

Benioff also reminded attendees that Apple recently passed Microsoft as the most-valued tech company on Wall Street. Apple may not be the first company you think of when it comes to the cloud, but Benioff has been throwing around the term “Cloud 2,” which includes new social, mobile, and real-time technologies.

And Benioff certainly loves Apple’s new iPad. Today, Salesforce demonstrated its first native iPad application, the Chatter app; it gave out 10 free iPads to randomly selected event attendees; and it brought out Apple’s Michael Tchao to talk about the iPad as a “great platform” for enterprise apps.