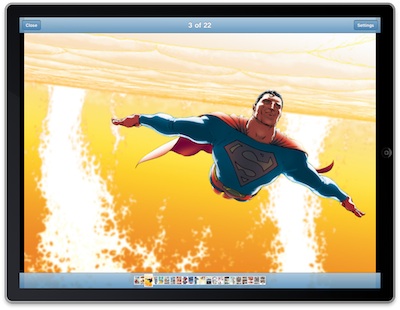 Marvel Comics made a splashy entry into the digital comics industry in April when it launched a slick comics reader for the iPhone and iPad. Now its big competitor, DC, is following suit with its own iPad app and more.

Besides being good news for comics readers, this is a big win for New York startup ComiXology, which built the Marvel Comics app. Not only did ComiXology build the DC Comics app (iTunes link), it’s also selling DC’s books within its own ComiXology-branded app as well.

With this deal, ComiXology has enlisted the two biggest comics publishers for its plans, plus a number of other smaller ones. All of the apps use the company’s “guided view,” which helps users glide between panels by swiping their touchscreen rather than reading a whole page at once, or awkwardly trying to zoom in to different parts of the page. ComiXology built a reader for your desktop Web browser, too.

In addition, DC has announced a deal with Sony PlayStation to sell comics for reading on the PlayStation Portable. (Sony Online is developing a multiplayer game based on DC’s characters, called DC Universe Online.)

Comics will cost between $0.99 and and $2.99, DC said. As far as the actual content goes, DC is only selling a fraction of its library for now — about 100 issues with ComiXology and 80 issues with PlayStation, including the first issues of popular titles like Sandman and All Star Superman.

Most of the comics are at least a few months old or are previews rather than full comics, so they don’t compete directly with the issues in stores (something that store owners have understandably been concerned about). DC said it will experiment with releasing digital issues of a miniseries called Justice League: Generation Lost on the same day they go on-sale in physical stores. Marvel has been dipping its toe into the same model, but so far only with one issue of Iron Man.

In an attempt to assuage the concerns of store owners, DC (which is owned by Warner Bros.) said it will “collect a portion of digital revenues to be invested back to and on behalf of comic book retailers in a variety of initiatives.”

There seems to be a big demand for these comics. The Marvel app has been hovering near the top of the most popular free book apps in the App Store since it launched, and today DC’s app shot past Marvel, as well as Amazon’s Kindle app, to become number two. (Number one is Apple’s own iBooks.)