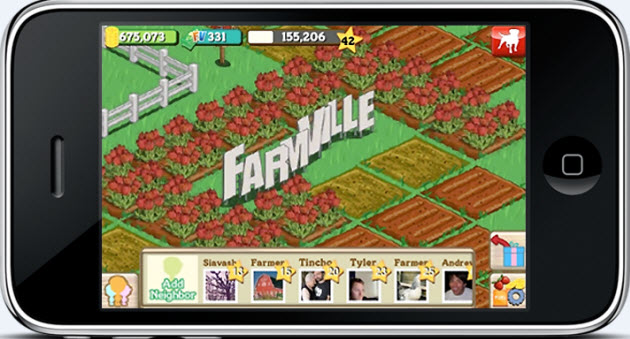 FarmVille, the obsession of millions of Facebook users, has finally made its way to Apple’s App Store, just in time for the Thursday debut of the iPhone 4. The biggest game in the world is now available for purchase and can be used with Apple’s iPhone, iPod and iPad devices.

It’s a big move for social game publisher Zynga, which, until now, focused mostly on making Facebook games. FarmVille, free to play, dominates the social network, with more than 63.8 million monthly active users, according to AppData. Zynga makes money on FarmVille as users pay real money for virtual goods. A small percentage of users pay, but that’s enough to generate huge profits for Zynga. Now FarmVille players will be able to play the same game either on Facebook or on the iPhone. 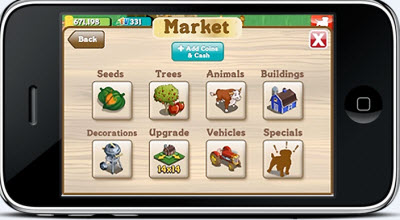 The opportunity on Facebook has been so big that Zynga canceled its fledgling iPhone effort a while ago (leaving it with a small number of iPhone games such as Live Poker, Mafia Wars, Vampires: Bloodlust, Scramble 2 and Street Racing). The launch of FarmVille on the iPhone suggests that Apple’s platform now represents a good opportunity for incremental growth—another push by Zynga to reassure investors that it’s more than just a Facebook-app company.

As iPhone device sales grow past 85 million, Zynga could make a lot of money through iPhone game sales. The launch is timed to the one-year anniversary of FarmVille and the launch of the iPhone 4.

On top of that, diversification of revenue is increasingly important for Zynga, which has expanded into mobile social games in Japan and launched deals with MSN and Yahoo to spread its games far and wide. The diversification is one of the necessary moves if Zynga is to go public at some point in the future.

FarmVille could do well on the iPhone, as it is a well-known brand name now, and branded games do well on the iPhone. With 225,000 apps, users are gravitating to the brands they know. Mark Pincus, chief executive of Zynga, first showed off the FarmVille app at Apple’s Worldwide Developer Conference on June 7. 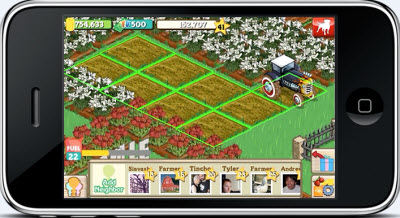 At WWDC, Zynga noted that there will be special marketplace items for iPhone users, including a snow leopard and white apples. You can use your finger to harvest more efficiently on the iPhone’s touchscreen. It’s easy to harvest crops or drive tractors. Push notifications tell users when it is time to harvest crops.

Zynga plans to roll out multitasking functionality and enhanced graphics to take advantage of the iPhone 4’s retina display, which can display twice as many pixels per square inch as earlier iPhones.

In the past year, FarmVille grew to become the biggest game in the world in many respects. It has generated more than 100 billion page views, players have received over 23 billion gifts, and 200 million gifts are sent in FarmVille every day. That latter number is twice the number of Father’s Day cards that Hallmark sells.

For Valentines Day, players sent 1.7 billion Valentines over 10 days. Zynga says it has 75 million FarmVille users, more than the AppData number on Facebook. That could mean that Zynga also has millions of users on MSN and Yahoo as well as FarmVille.com. Clearly, though, the bulk are on Facebook.